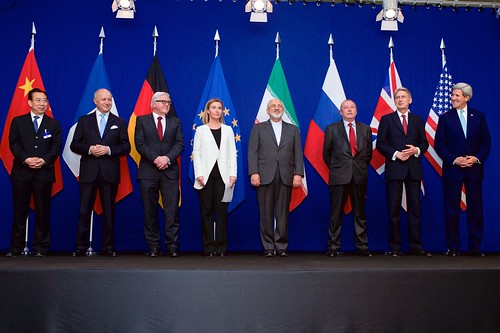 Today the top Iranian nuclear scientist Mohsen Fahrizade was assassinated in a complex terror attack while driving on a highway in Absard, a small city just east of Tehran. An explosion stopped his car. Then shots were fired at him from two directions.

Between 2010 and 2012 four other nuclear scientist in Iran were assassinated in similar ways.

There is little doubt about who is responsible for this attack:

Fakhrizadeh was named by Israeli Prime Minister Benjamin Netanyahu in 2018 as the director of Iran's nuclear weapons project.

When Netanyahu revealed then that Israel had removed from a warehouse in Tehran a vast archive of Iran's own material detailing with its nuclear weapons program, he said: "Remember that name, Fakhrizadeh."

The Islamic Republic of Iran has since its establishment rejected all weapons of mass destruction out of religious reasons. Its leader Ayatollah Khamenei has issued a fatwa the prohibits any attempts to develop, produce or otherwise introduce such weapons.

While a terror attack against its top nuclear scientist can be seen as an act of war Iran is unlikely to openly take revenge for it. Doing such would only play into Netanyahoo's hands as he attempts to goad the U.S. into an attack on Iran.

The assassination of Mohsen Fahrizade does not aim at Iran's nuclear program. Its purpose is to assassinate the nuclear deal with Iran before president elect Joe Biden comes into office.

There are expectations, which I don't have, that Biden will rejoin the nuclear deal with Iran. The Trump administration had left the deal and had re-introduced severe sanctions against the country. President Trump retweeted news of today's assassination. If Biden really wants to revive the deal he should immediately condemn today's assassination. Obama did similar when the other scientist were killed.

There are still 55 days until Trump leaves the office. Netanyahoo will use that time to launch more provocation.

Republished from Moon of Alabama, Posted by b at 11:18 UTC

Moon Of Alabama was opened as an independent, open forum for members of the Whiskey Bar community.  Moon of Alabama's purpose is to discuss politics, economics, philosophy and blogger Billmon's Whiskey (more...)
Related Topic(s): Iran, Add Tags
Add to My Group(s)
Go To Commenting
The views expressed herein are the sole responsibility of the author and do not necessarily reflect those of this website or its editors.