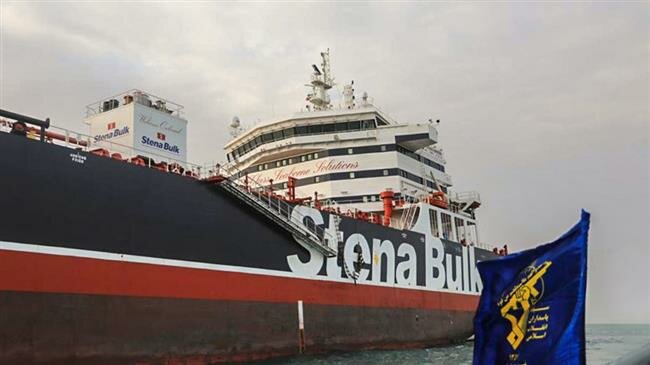 The news that Iran seized a British-flagged tanker accused of piracy provoked first shock then jubilation among Iranians worldwide. An Iranian flag atop a British ship? That's a dream deferred for two centuries.

Washington was apoplectic that a vessel of their vassal could be touched by Iranian hands. US foreign minister Mike Pompeo used the incident to try and fabricate a "naval coalition of the willing", but the UK's next prime minister may not be as phony as Tony Blair. However, this is an issue for Part 2.

Iranians certainly feel justified to savor this historic news, which gives Iranians the time to reassess the even more historic news that followed Iran's downing of a US drone, when Trump said that any war with Iran "would not last very last long".

Nobody with any sense believes that the US would quickly mop the floor with Iran. Tellingly, Trump did not threaten that "US tanks will soon be in downtown Tehran" because they won't be. Such a scenario is unthinkable due to Iranian unity, the Basij [mobilization], US military exhaustion, international recognition of Iran's innocence, and many other realities.

And yet, neither did Western analysts move on to the necessary alternative meaning: Washington realises that a long-term invasion and occupation is no longer possible, and that they cannot even engage in long-term hostilities with Iran and prevail.

This analysis gained further credibility when it became clear that Trump only called off his post-drone retaliatory bombing because he was explicitly told by Iran - via diplomatic third parties - that Iran would regard any bombing "as the beginning of the war".

Again, the Western mainstream media's explanation for the cancelled US escalation totally defied credibility: telling us to believe that Trump is a humanitarian who "did not want to kill 150 Iranians" is totally absurd he has had no problem killing well over 150 Syrians. Such an analysis can only be declared "logical" to a Western bloc which would prefer to believe anything EXCEPT that Iran could or has prevailed.

I certainly agree that Iran would retaliate there is seemingly universal domestic approval for retaliation in any attacked nation. But in Iran a feeling shared by many is a flaming, urgent, revolutionary demand to preserve the gains of the revolution. In addition, there is an expectation nationwide that the government must be able to prevent a second Western invasion. They could not prevent invasion in 1980, due to the mismanaged country bequeathed by the monarchy, and a horrific 8-year war was the result. Iranians do not want to live through that again: if the modern Iranian government is not ready or capable of responding to another attack on Iran, that is a huge problem for their job security as civil servants.

But back to the fear of the US regarding Iranian retaliation: Quite simply, they fear that they would lose in any conflict - that's the only reason why the bombing did not occur, not the moral heart of the US president. Washington has no problem bombing Syria, Libya, etc. these countries cannot retaliate like Iran now can.

Nuking a country to the Stone Age is just blather which wastes time - it cannot be done without essentially ending the world, and it requires accepting responsibility for outdoing even German-sized massacres. I note that the same talk produced nothing but failures in Afghanistan, Iraq, Vietnam and Korea. Such talk isn't even worth addressing seriously, as it's merely public relations for childish Western minds, not military strategy in the 21stcentury.

Washington has recognized there has been a sea-change in the balance of power in the Persian Gulf region. Analyses of the subsequent events over the last month cannot be understood until we comprehend the new reality. I think the Iranian government does understand the reality of their strength and the West's weakness, and I think that explains why they have been acting so historically bold.

I'm surprised more people didn't realise this historic victory of Iran's revolution? It's great news for Iran and for those who love peace around the world: Washington knows it cannot turn Iran into Afghanistan, Iraq, South Korea or South Vietnam, and this was a very real concern!

Iran is bold because they have achieved military superiority