Cross-posted from The Guardian
Yet again, the US and its allies spread mass human misery though a policy that is as morally indefensible as it is counter-productive 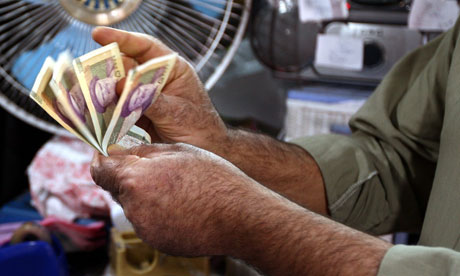 The Economist this week describes the intensifying suffering of 75 million Iranian citizens as a result of the sanctions regime being imposed on them by the US and its allies [my emphasis]:

"Six years ago, when America and Europe were putting in place the first raft of measures to press Iran to come clean over its nuclear ambitions, the talk was of 'smart' sanctions. The West, it was stressed, had no quarrel with the Iranian people -- only with a regime that seemed bent on getting a nuclear bomb, or at least the capacity for making one. Yet, as sanctions have become increasingly punitive in the face of Iran's intransigence, it is ordinary Iranians who are paying the price.

"On October 1st and 2nd Iran's rial lost more than 25% of its value against the dollar. Since the end of last year it has depreciated by over 80%, most of that in just the past month. Despite subsidies intended to help the poor, prices for staples, such as milk, bread, rice, yogurt and vegetables, have at least doubled since the beginning of the year. Chicken has become so scarce that when scant supplies become available they prompt riots. On October 3rd police in Tehran fired tear-gas at people demonstrating over the rial's collapse. The city's main bazaar closed because of the impossibility of quoting accurate prices....

"Unemployment is thought to be around three times higher than the official rate of 12%, and millions of unskilled factory workers are on wages well below the official poverty line of 10m rials (about $300) a month."

Pervasive unemployment, inflation, medicine shortages, and even food riots have been reported elsewhere.

That sanctions on Muslim countries cause mass human suffering is not only inevitable but part of their design. In 2006, the senior Israeli official Dov Weisglass infamously described the purpose of his nation's blockade on Gaza with this candid admission: "The idea is to put the Palestinians on a diet, but not to make them die of hunger." Democratic Rep. Brad Sherman justified the Iran sanctions regime this way: "Critics of sanctions argue that these measures will hurt the Iranian people. Quite frankly, we need to do just that."

Related Topic(s): Food Crisis; Iran; Mass Murder; Murder By Drone; Sanctions, Add Tags
Add to My Group(s)
Go To Commenting
The views expressed herein are the sole responsibility of the author and do not necessarily reflect those of this website or its editors.