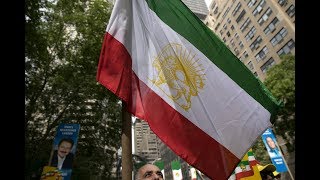 There seems little doubt that the surge in New Year protests across Iran was, at least in part, following a regime-change agenda set by the United States.

Public statements issued by US President Donald Trump and his senior officials all made strident calls in support of protesters while denigrating the Iranian government as a "brutal oppressor." Arguably, that amounts to audacious incitement of sedition in a foreign state, and such American misconduct should be legally sanctioned.

What's remarkable too is just how close the recent turmoil in Iran seemed to follow a well-worn US formula for regime change, including political statements of condemnation; biased media coverage to undermine the legitimacy of the target government; and the apparent hijacking of peaceful protests by violent provocateurs.

Such a formula has been used by Washington and its allies in dozens of countries over the decades, including more recently in Syria during the 2011 unrest that led to an all-out war.

What is acutely resonant is the historical background. Iran was probably the first nation to have been subjected to American regime-change operations in the post-Second World War period, with the CIA-led coup carried out in 1953.

But first, let's look at the flagrant attempts by the US to destabilize the Iranian government through highly pejorative and misleading public statements.

Last week, the American ambassador to the UN Nikki Haley even claimed that "the Iranian people are crying out for freedom against their dictators." A senior official in the US State Department also admitted that his government was communicating via social media with demonstrators in Iran.

Washington's top diplomat, Secretary of State Rex Tillerson, openly said in a media interview this weekend that his government is seeking "political transition" in Iran -- or, in other words, regime change.

Also this weekend, the US called an emergency meeting of the UN Security Council in an attempt to censure the Iranian government for the dozens of deaths incurred during the week-long protests. Haley declared: "The world is watching what Iran does."

Iran, Russia, and China have berated the US for violating Iranian sovereignty by interfering in the country's internal affairs. The brazen attempt by the US to fuel protests in Iran is indeed a serious breach of the UN Charter forbidding interference in any nation's political matters. US regime-change policy is arguably criminal conduct.

It remains to be seen just how actively involved on the ground US agencies were in stoking the recent protests in Iran. The initial demonstrations that first broke out on December 28 in the city of Mashhad quickly spread to dozens of other urban centers. Iranian authorities have blamed the US and other foreign enemies for being behind the disturbances.

A legitimate part of the rallies was motivated by genuine economic grievances among the population. But at the same time, the rapid escalation of violence and armed attacks on police stations suggest that a subversive plot was being orchestrated.

Related Topic(s): CIA Crimes; Coup; Iran; Iran Russia And China; Regime Change, Add Tags
Add to My Group(s)
Go To Commenting
The views expressed herein are the sole responsibility of the author and do not necessarily reflect those of this website or its editors.