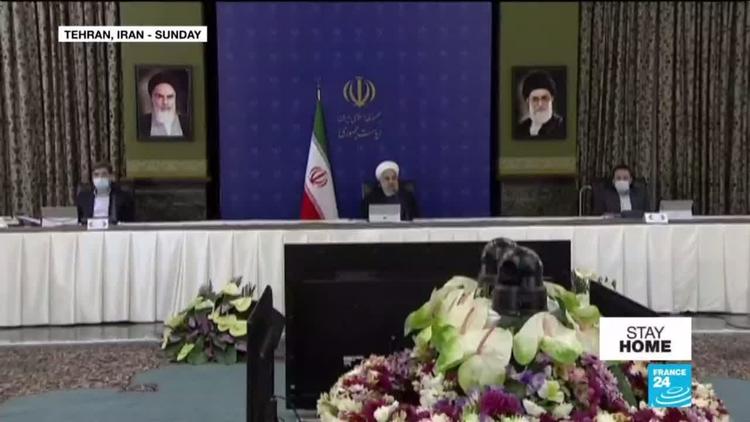 The European Union has activated the Instex trading mechanism for the purpose of sending medicine and medical supplies to Iran to fight the coronavirus outbreak. Instex operates in Euros rather than dollars and avoids US banks, so that the US Treasury Department cannot claim jurisdiction over it. The Instex bank officials have been given European Union diplomatic passports so that imperial Washington cannot arrest them for breaking the Iran sanctions. US allies have had to go to enormous lengths to maintain their own treaty commitments to Iran and avoid being fined billions for defying Trump's pique.

Trump administration officials have taunted Iran that the coronavirus would not save it from their extraordinary financial and oil blockade. When pressed a couple of weeks ago on this policy, Trump shouted at a news conference "They know what they have to do!" as though he were a Mafia bagman demanding the vig.

Covid-19 has hit Iran harder than most other countries in the world, with one Iranian dying every 10 minutes of the disease. As of Tuesday, the country had 44,606 cases, with 3,703 of them in critical condition, and nearly 3,000 had died. These statistics rival US numbers (4,000 or so dead as I write) even though Iran only has a fourth the population of America. That is, proportionally, the Iran toll is like 11,000 or so Americans being dead, already. Many observers believe that the official statistics in Iran are understating the situation and that the toll is actually greater.

The Trump financial blockade of Iran has prevented Iranians from buying needed tests, ventilators, masks and other key medical equipment because they can't make the needed bank transfers. Trump slapped on this blockade and breached the US treaty with Iran signed in 2015, despite Iran upholding all the provisions of the Joint Comprehensive Plan of Action or nuclear deal. The blockade has no UN Security Council or even Congressional basis in law.

Trump is not blocking medicines and medical supplies per se. He is just making it impossible for Iranians to buy them abroad. Ordinary Iranians, in addition, have been so hurt by the Trump sanctions that many just cannot afford needed medicine even where it already exists inside the country.

Disproportionately harming civilians as part of a struggle with another country is a crime in international law, and what Trump is doing may well constitute genocide as defined in the Rome Statute of 2002 that authorized the International Criminal Court.

The Trump administration has suffered a lot of bad press for its continued blockade on Iran during the pandemic, which is hurting Iranian civilians. Iran's foreign minister, Mohammad Javad Zarif, on Monday accused Trump of "medical terrorism." Perhaps for that reason, the State Department said it is not bothered by the recent Instex transfer of humanitarian medical supplies. And Pompeo himself, who hates Iran with an undying blazing passion, even said it was possible that the administration would loosen the blockade on Iran during the coronavirus crisis. This, according to Arshad Mohammed and Humeyra Pamuk at Reuters.

On Monday, 34 members of Congress, including Bernie Sanders, Alexandria Ocasio-Cortez, and Elizabeth Warren, wrote a letter to the Secretary of State Mike Pompeo and Secretary of the Treasury Steven Mnuchin calling on them to suspend sanctions on Iran during the health crisis.

Related Topic(s): Corona Virus Coronavirus Covid-19; Euro; European Union; Financial; Iran; Iranian Foreign Minister Javad Zarif; Sanctions; Trump And Iran; Trump Cruelty, Add Tags
Add to My Group(s)
Go To Commenting
The views expressed herein are the sole responsibility of the author and do not necessarily reflect those of this website or its editors.