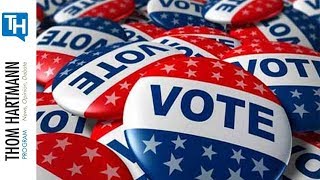 The chaos in Iowa's Democratic primary is nothing new.

Pure incompetence along with election manipulation and theft have been with us since the birth of the Republic.

But since Florida 2000, bitterly contested ballots with immense long-term impacts have launched the nation as a whole into a toxic limbo that could easily contribute to a Trump victory this fall.

There is an antidote: hand-marked and hand-counted paper ballots. Now they can even come with computerized backup that can make the vote casting and counting process safe, secure and transparent.

But in Iowa 2020, we see the consequences of doing otherwise.

The Democratic Party is again paying the price. It has indisputably shown the world it is incompetent and unable to run a critical election being watched everywhere in real time by a deeply polarized public.

Has this election been stolen? It's unclear, but the party's corporate wing, which controls the voting apparatus, has made no secret of its fear and loathing for Bernie Sanders and his populist social democracy.

A product of the 1960s New Left, Bernie Sanders has forged alliances with new generations of activists pushing for social justice, a Green New Deal, Medicare for All, abolition of student debt, free higher education, a more just immigration policy, racial justice and a challenge to empire. This all clearly frightens the corrupt Democratic Party apparatus with its deep corporate loyalties.

Thus, it's become a widespread article of grassroots faith that some mainstream Democrats might well prefer a second term for Donald Trump over a first for Sanders ... or any other social democrat like him.

Is that what's happening in Iowa? There's no clear answer, but it's worth noting that above all, a chaos-prone system like the one absurdly installed for this year's primaries serves those who installed it. If you anticipate an unwelcome outcome like a Sanders victory make the table easy to overturn.

Three such elections have given us the presidencies of George W. Bush and Donald Trump.

In Florida 2000, absurdly designed butterfly ballots confused and misled thousands of voters. Faulty ballots that resulted in indecipherable "hanging chads" caused chaos and delay. Malfunctioning machines in Volusia and other counties bounced around 20,000 votes like a pinball. Desperate recount attempts were assaulted by a rightist "Brooks Brothers" mob that allowed a Supreme Court intervention and put George W. Bush in the White House.

In 2002, a GOP Congress responded with the Help America Vote Act, earmarking billions of dollars to spread easily hackable electronic machines virtually everywhere. Bob Ney, the Ohio congressman who shaped the bill, later went to prison for corruption (related to a separate issue).

Related Topic(s): 2020; Ballot_measures; Corruption; Democrats; Iowa Caucus; Recount; Trump; Voting, Add Tags
Add to My Group(s)
Go To Commenting
The views expressed herein are the sole responsibility of the author and do not necessarily reflect those of this website or its editors.