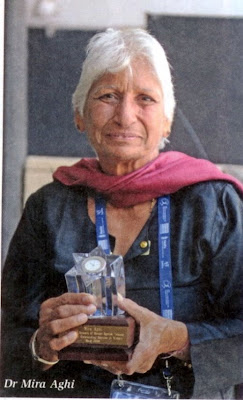 The International Network of Women Against Tobacco (INWAT) presented its Tribute for Outstanding Service to Women award to Dr Mira Aghi (65 years) at the recently concluded 14th World Conference on Tobacco or Health (WCTOH) in Mumbai, India.

Dr Mira Aghi (65 years) is a behavioural scientist and an inspiration for many activists and crusaders working against tobacco. She has been involved with the Advocacy Forum for Tobacco Control (AFTC) since its inception. Dr Aghi has been working with the anti-tobacco movement for 30 years. She has not only made an outstanding contribution, but has also created benchmarks in women’s leadership against tobacco.

"Encouraging women's leadership among health workers at the grassroots level will motivate others to be a part of it," said Dr Aghi. She proposes a formal training program to engage female health workers at all levels.

“Women's leadership can be developed by educating them about the ill-effects of tobacco in a skilled manner that will motivate them to work against tobacco. However, it is the supportive environment that will finally lead to the eradication of tobacco epidemic” said Dr Aghi.

"A woman will continue to stay vulnerable till she takes it upon herself to change the situation. Society feels at ease to maintain the status quo. Young girls are beginning to feel that society is hard to change so they are changing themselves. We have to ask ourselves what would be better. Should we bend or stand erect?" says the tireless crusader, Dr Aghi.

Dr Aghi, who has been a United Nations consultant on HIV/AIDS, drug abuse and adolescent issues, holds a PhD from the Loyola University, Chicago, in the US. “I am very concerned about today’s generation which tends to get influenced by tobacco advertising tactics and considers that tobacco is a fashion statement. This issue needs to be addressed uniformly,” she said.

Busy with the anti-tobacco movement, her first brush with the issue occurred 30 years ago when she happened to work with the production of an educational film. “I wasn’t much aware about the happenings on the issue and other global movements taking place until I worked and researched on it for the film.”

“The research results moved me deeply and I passionately felt like saving people from the tobacco addiction. I therefore stayed put and took a full-time plunge into this social cause,” said Dr Aghi in a daily newsletter of the 14th WCTOH. In the late eighties, Dr Aghi led a campaign against an Indian tobacco company which had plans to promote a women’s cigarette according to a 14th WCTOH newsletter.

Over the past years, there is a growing consensus to integrate tobacco control with existing development initiatives at all levels; however, Dr Mira Aghi sensed how the cross-cutting issues of tobacco control with gender-based inequalities and the power imbalance a woman faces in her life at all stages exacerbates her vulnerability to substance abuse. The foresight and vision of Dr Aghi deserves special mention and INWAT's International Award is a well-commanded tribute to her ongoing and sustained contribution to public health over decades.

Bobby Ramakant is a development journalist and has been writing on development issues since 1991. Health is one of the key focus areas he writes on. He is also a World Health Organization (WHO)'s WNTD awardee for 2008
Related Topic(s): Addictions; Awards; Health; Health- Preventive Medicine; India; India; Mumbai; Smoking Cigarettes; Tobacco; Women; (more...) World, Add Tags  (less...)
Add to My Group(s)
Go To Commenting
The views expressed herein are the sole responsibility of the author and do not necessarily reflect those of this website or its editors.