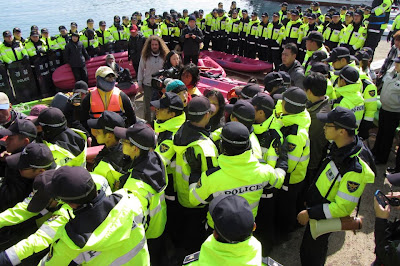 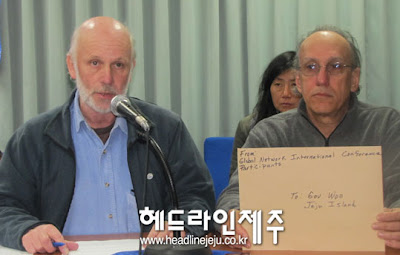 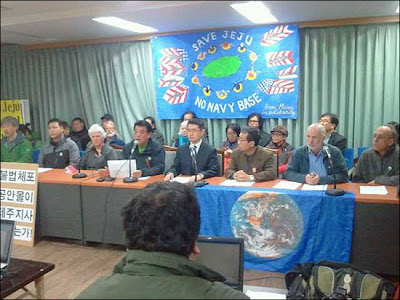 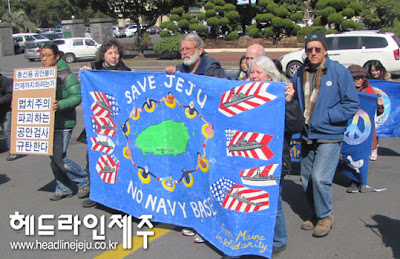 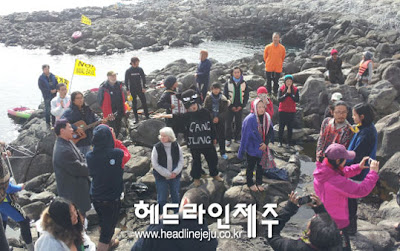 (Image by Unknown Owner)   Details   DMCA
Gathering on the rocky coast on Feb 26. Got there by kayak and eventually 16 of us arrested for crawling under razor wire to protest the Navy's destruction plans


It was difficult for all of us to leave Gangjeong village on Jeju Island, South Korea. My last day in the village was filled with horror as the police surrounded the villagers and their kayaks and would not allow them to be put in the water. Four villagers were arrested and a daylong back and forth struggle took place where villagers and supporters would not give up their attempts to pull a kayak free and have people quickly put them in the water and try to head toward the embattled rocky coastline that is now virtually sealed off with razor wire.

Several people were hurt, as the police would swarm over any attempt to remove a kayak. Catholic Father Moon was knocked to the bottom of one scrum along with another revered villager who got his hand cut up. A Frenchman named Benji, who has been in the village for months, was knocked down and repeatedly pounced on by the police. I saw the police push one man off a ramp who was filming the scene.

Natasha Mayers (Maine artist) and Global Network board member Sung-Hee Choi were able to get one kayak into the water. Angie Zelter put on a life vest and jumped into the cold water and swam to the rocky coastline. Benji jumped in with half of a wet suit on to make sure she didn't drown.

At one point I was asked to help create a diversion by going into the middle of where the police were surrounding the kayaks and attempt to pull a kayak out while others took kayaks from a nearby boat house. This worked and I was exhausted after trying to pull a kayak free from the grips of the police for at least 10-15 minutes during my diversionary attempt.

Earlier in the day yesterday about 30 of the villagers and remaining international supporters made the one-hour trip to Jeju City to hold a news conference demanding that the weak-kneed Governor Woo stand up to the Navy and protect the 450-year old village from destruction by the Navy. A large number of media covered the news conference and then we moved across the street to the governor's office building but they locked us out.

I've never seen such a thing where taxpaying citizens were locked out of their own government building - especially with the large media throng accompanying them. After much Korean-style yelling and demanding they finally opened the door and allowed Mayor Kang, Dave Webb (UK), Atsushi Fujioka (Japan), me, and a translator to go up and deliver our letter to the governor's office.

All day long I couldn't get out of my head the thought that South Korea is absolutely a police state. I think it is a sign of where we in the U.S. are quickly heading. The South Korean people have been dealing with this reality for many years but we in the U.S. are hardly prepared for what this tastes like.

I've just arrived at JFK airport in New York City after a 13-hour flight from Seoul. When I checked the Facebook page called No Navy Base on Jeju! I saw a tweet from Father Moon saying, "February 28 Gangjeong port blockade! Today, worse! They surrounded the kayak storage container. Not even allowed to enter the sea, blocking fiercely! SWAT team has been deployed, who was mobilized at that time of Yongsan eviction crack down in 2009 [in Seoul]."

The Navy has been bringing police in from Seoul by the hundreds at a time. They have no allegiance to Jeju Island and are conscripts doing their two-years of service.

So in the last two days about 30 people have been arrested for trying to protect the sacred coastline of Gangjeong village. The villagers tell us that every day is like this - an endless struggle just to be able to stand on their own shoreline or now even have access to the water with a kayak!

People keep asking what they can do to help. They should continue to call the South Korean embassy/consulate nearest to you. But most importantly more international delegations are urgently needed in the village. When the international presence is strong the police have to back off some of their more aggressive treatment of the villagers.

I can't urge strongly enough for activists around the world to discuss sending 2-3 folks from your community to Jeju for 7-10 days. We can help you make the necessary contacts there. Please discuss this great need in your local community. I can promise you it will be an experience that you will never forget. The villagers are worn out and would be thrilled if you could bring them this kind of support.

Related Topic(s): Navy; Obama; Obama; Peace Activism; Peace_War; Protest, Add Tags
Add to My Group(s)
Go To Commenting
The views expressed herein are the sole responsibility of the author and do not necessarily reflect those of this website or its editors.