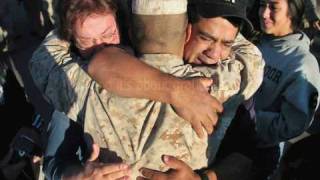 Thanking our military It is a great example of an individual taking the initiative and developing his own way to express his gratitude for the service and sacrifice of our military ...
(Image by YouTube, Channel: RepKayGranger)   Details   DMCA

American hugging soldier and "thanking him for your service"

Two scenarios I encountered this morning plus an article I read yesterday, though separate and distinct seem to reflect to this observer what we may have become as a people.

Afterward we struck up a short conversation and she related she took this same train each day to get to work, usually had the exact fare and most of the time it was the same conductor. So he knew her as a regular passenger. Yet in this instance he was refusing to let her ride the additional two stops which was necessary for her to get to work on time.

The whole encounter stuck in my head. The conductor was legally correct. The fare was thus and she didn't have it. Yet him having seen her previously as a regular passenger wouldn't that alone be enough to let her ride the additional two stops? Why be so harsh with no apparent empathy to her plight? Why not show some kindness rather than "I can take you to-------"?

I wondered is the conductor's action typical of what we Americans have become or is he an aberration?

The other scenario was a discussion I had relating to Otto Warmbier, the American student who in a coma had just been released from prison by North Korea who died a week later in the University of Cincinnati hospital.

I related I saw the headline of his death but hadn't followed the details. The other person in our discussion had followed the Warmbier story saying he'd been in prison and in a coma for over a year after he'd been found guilty by North Korea of stealing a propaganda poster while trying to leave the country with it. However the discussion was short lived as I had to catch the aforementioned commuter train. I've since read up on the story though all MSM accounts.

The North Korean's said they released Warmbier as a "humanitarian gesture" that the coma was a result of botulism and aspirin combination. The U. of Cincinnati hospital said there was no sign of botulism as well as no signs broken bones or other physical trauma. However Warmbier's family contends he was brutally tortured by the evil regime.

Think about it. Warmbier was a good looking, white 22 year old American, a former U. of Virginia student who died in his youth and killed at the hands of the hated North Korean regime. Who in America is going to believe the evil North Korean's?

I came to believe Warmbier's death was the headline story of the week in the MSM.

How about Saudi Arabia the Wahhabi regime whose ideology gave birth to ISIS, who behead homosexuals, treat women as chattel and brutalize and torture with impunity. They're our favorite monarchy in the Middle East who Trump just signed a $110 billion arms deal that could be worth $350 billion over 10 years.

Then of course there's America's other favorite in the Middle East, Israel, who kill Palestinian's in Gaza and torture Palestinian's in its jails, all with impunity. As an added "plus" both countries share America's hated of Iran.

What denunciation do we see or hear about these two American favored regimes by our government or its complicit MSM? Nothing. So what do most Americans think about Israel or Saudi Arabia? If they do what do they think about the innocents these countries kill? Could most Americans locate them on a map?

Lastly I read an article titled, "Thank You for Your Killing" [1] by Jacob G. Hornberger who wrote, "One of the most interesting bromides to enter the American political lexicon after the 9/11 attacks has been the line that Americans have been taught to say to American soldiers: 'thank you for your service'.

Retired. The author of "DECEIT AND EXCESS IN AMERICA, HOW THE MONEYED INTERESTS HAVE STOLEN AMERICA AND HOW WE CAN GET IT BACK", Authorhouse, 2009
Related Topic(s): American Foreign Policy; American Hegemony; American Hypocrisy; American Military; American Terror; Political Mythology; Soldiers; Wars, Add Tags
Add to My Group(s)
Go To Commenting
The views expressed herein are the sole responsibility of the author and do not necessarily reflect those of this website or its editors.