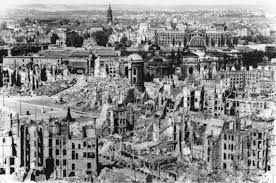 I've been rereading Inside the Third Reich, Albert Speer is an interesting historical persona. Twenty-eight years old an unemployed architect became a henchman of one of the world's most evil regimes. He wrote of his conversion into the cult of personality. He had nothing against Jews, he had been hired as an architect and given money and prestige, then given more money and more prestige when one day the question came, "would you like to join the Party?"

He was given the honorary rank as a colonel and began to wear the gaudy resplendent uniforms. Why not? He had to fit in, and all the other Nazis were wearing their gaudy uniforms. Through the serendipity oh so common in authoritarian regimes the armament ministers plane blew up shortly after takeoff. Speer was appointed as replacement armaments minister. He was in the inner circle now, a big-time big shot. Dining with the Fuhrer, Speer described his magnetism. How he and others were drawn in by it and once in orbit close could not escape it.

It is the classic description of a cult, once away from headquarters one could think rationally but once back in orbit could not act rationally. Speer fought against the mass deportation of foreign workers not because he was a great or humane guy. But if you rounded up ten thousand workers indiscriminately from France or Czechoslovakia their factory jobs at home would go unmanned. Ruthless German efficiency ruled, he was inside the bottle of his own department. But Speer was warned by associates not to visit any concentration camps and he took that advice. The truth you only suspect is easier to live with than the truth proved true.

As the war turned badly for Germany, Speer described the Fuhrers many incompetency's. The new jet plane designed as a fighter was to be built as a bomber limiting its range and without a bomb sight, its effectiveness. German cities were being pulverized day and night by Allied bombing and all Speer could say was, "Yes, mien Fuhrer." An authoritarian cult where one must bow to the will of the leader no matter how corrupt or insane. Speer's worries and concerns multiplied when he saw the condition of the forced laborers building the V-2 rockets. Speer intervened but again not because he was a great or humane guy. He intervened because sick and dying workers couldn't build as many rockets.

He was fully immersed in this murderous cult of madness because he was defending his country and his Fuhrer. As the war came to its conclusion Speer met a rural German farm family who recognized him. There was one month left in the war. The Allies had crossed the Rhine as the Russians were closing in on Berlin. The family greeted him warmly and assured him the Fuhrer still had some surprises up his sleeve. A classic case, where reality can be ignored inside the cult. The leader is infallible, the leader is invincible. The leader is all powerful the leader is the source of all truth.

Speer found himself in Spandau prison, he was one of the few Nazi war criminals who accepted responsibility for his crimes. He found himself in Spandau as one who had been asleep and suddenly awoke. He recoiled in horror at the monstrosity of his own crimes and wrote to his wife, "What matters most to me is that I manage to tell the truth about the end. That is what the German people must be told. The best way I can help my people is to speak the truth about the whole madness. There are no benefits for me in this course, nor do I want any benefits."

History does not repeat itself, history is a river of time running in parallel tributaries. This may be different from that or that different from this. The warriors may use swords or airplanes, but the behavior of the humans involved is always the same, be it Speer or Sarah Huckabee Sanders. The cultish behavior is the same. The end is always the same, the Fuhrer wanted to leave Germany as scorched earth wanting everything destroyed, bridges, power stations, telephone exchanges. Because if the Fuhrer was going to die, he didn't want Germany to survive. His madness and narcissism said without him Germany was unworthy to exist. How is this different from a chief executive who tries to limit aid to Puerto Rico? They aren't submissive enough they did not genuflect to his holiness.

"Hitler's dictatorship was the first dictatorship of an industrial state in this age of modern technology, a dictatorship which employed to perfection the instruments of technology to dominate its own people, By means of such instruments of technology as the radio and the public-address systems, eighty million people could be made subject to the will of one individual. Telephone, teletype and radio made it possible to transmit the commands of the highest levels directly to the lowest organs where because of their high authority they were executed uncritically. Thus, many offices and squads received their evil commands in this direct manner. The instruments of technology made it possible to maintain a close watch over all citizens and to keep criminal operations shrouded in a high degree of secrecy - Albert Speer

The truth of the Mueller investigation is garlanded by the protestations and claims of which hunt. An Attorney General / Court Jester capable of reading a thousand-page legal document in forty-eight hours and to reduce a two-year investigation down to four broken sentences. A Reichstag willing to kneel and subvert their own powers to the Fuhrer. Even as they know the Fuhrer is wrong, they know leader is infallible, the leader is invincible. The leader is all powerful, the leader is the source of all truth.

The Constitutional Crisis is upon us and will not end well. Concentration camps and the Fuhrer threatening his enemies while reallocating funds to his personal whims. Threatening the press, threatening the people and threatening the country with violence if anyone dares threaten to threaten him. This is not a Presidency, this is a Fascist coup in a failure of Democracy.

Related Topic(s): Coup; History; Hitler; Inside Information; Leader; Nazis; Radio; State; Technology; Third World America; (more...) Time; Time; Time; Violence, Add Tags  (less...)
Add to My Group(s)
Go To Commenting
The views expressed herein are the sole responsibility of the author and do not necessarily reflect those of this website or its editors.