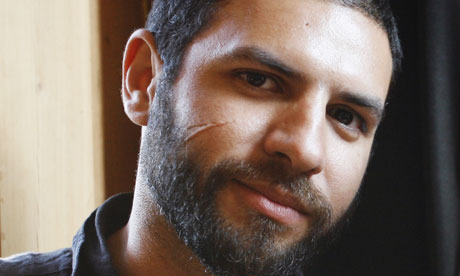 (Image by Unknown Owner)   Details   DMCA
Journalist Ghaith Abdul-Ahad, who was incarcerated in one of Gaddafi's
sub-human prisons for two weeks. Photograph: Martin Argles for the Guardian

Iraqi-born and award-winnning journalist Ghaith Abdul-Ahad has been one of the world's bravest independent journalists since the start of the Iraq War in 2003. Before that he was an underground fugitive from Saddam Hussein's police as well as a street photographer in Baghdad. When the US invaded Iraq, he became an unembedded journalist who is lucky to be alive today, because he started telling the unvarnished truth about the Occupation as well. He was even wounded by US forces in 2004, suffering a shrapnel wound to the head from an American helicopter that fired on a crowd in Baghdad, killing five others. Abdul-Ahad has also reported from such dangerous locales as Somalia, Sudan, Afghanistan and recently in Libya as a journalist for The Guardian , where he was arrested by Gaddafi's forces on March 2nd and not released until March 16. (Source).

Excerpted from The Guardian UK :

We ran into Gaddafi's troops on the outskirts of Zawiya, less than a mile beyond the last signs of rebel activity: a destroyed checkpoint, a bullet-ridden building and five burnt-out cars.

The soldiers were blocking the main highway to the coast with pickup trucks and armoured vehicles, so our driver took to the desert, skirting the roadblock in a wide arc before cutting back to the road. He was edgy after that, spooked even by the sight of a distant abandoned car parked in the middle of the road.

We -- the Brazilian journalist Andrei Netto and I, travelling in the company of rebels from western Libya -- would not be able reach Zawiya that night as planned. Instead we made for Sabratha, 12 miles to the west.

It was clear that Sabratha had been reclaimed by Gaddafi loyalists. The police and intelligence service buildings were charred, but they had new green flags of the regime flying above them.

We separated from our rebel escorts and took shelter in an empty half-built house, away from the militiamen roaming the streets. Later that night we saw four men approaching, dressed in dark tracksuits and carrying sticks except for one, who had a gun. When they surrounded the house there was no way to escape. They took our phones then frogmarched us, heads down, to an SUV, ranting as we went. "You sons of bitches! You Jews and Zionists! You Arab traitors! You want to topple Gaddafi? We will rape your mothers! Gaddafi will show you!"

I was put in the pickup first, then Netto. As he was getting in, a tall militiaman swung a metal pipe that struck him on the head. Inside the car the man sat behind us, jabbing at us with a stick as he continued his tirade.

We were taken a short distance to a compound guarded by armed men, where we were interrogated, then blindfolded and driven for two hours to a prison that I now know is in Tripoli. We were separated there; I have not seen Netto since. Still blindfolded, I was interrogated for four hours about my "collaboration" with the infidel British newspaper the Guardian. Then they walked me downstairs to the cells. (FULL STORY CONTINUED HERE)

I am a student of history, religion, exoteric and esoteric, the Humanities in general and a tempered advocate for the ultimate manifestation of peace, justice and the unity of humankind through self-realization and mutual respect, although I am not (more...)
Related Topic(s): Brutality; Gaddafi Propaganda Machine; Gaddafi The Torturer; Guardian; Journalist Released; Journalists Detained; Journalists-Journalism; Libya; Libya Revolution; Muamar Al Gaddafi; (more...) Prisoners, Add Tags  (less...)
Add to My Group(s)
Go To Commenting
The views expressed herein are the sole responsibility of the author and do not necessarily reflect those of this website or its editors.