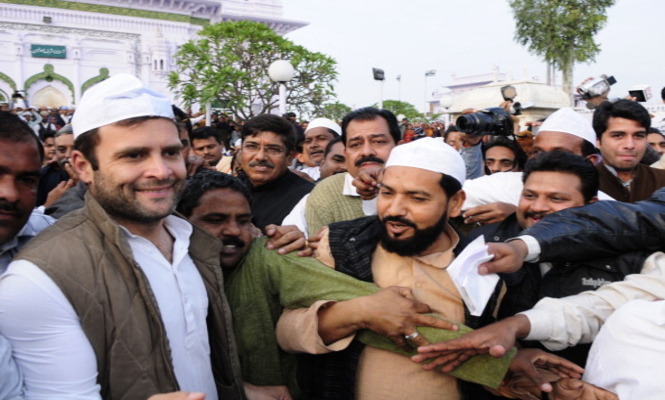 Election Commission has now mandated that the manifestos of political parties must be declared 48 hours before voting. (The 2019 General Elections kick off in seven phases on April 11).

It's important for Indians, especially the Muslims, to look at Congress' manifesto closely and understand that the grand old party has never ever, and certainly not now, would stand by India's largest minority.

Congress had nominated only 27 Muslim candidates in the 2014 Lok Sabha electionsa paltry 5.6 per cent of its total candidates.

This wasn't true only of the remote-controlled Manmohan Singh's government of UPA 1 and UPA 2 between 2004-2014 even under Jawaharlal Nehru and Indira Gandhi very few Muslim candidates were nominated by the Congress in Lok Sabha polls.

Must Muslims must not be aware that the Congress manifesto in recent assembly elections in Madhya Pradesh had promised to build gaushalas (cow shelters), medical usage of gaumutra (cow urine) and cow dung. It had promised to promote Sanskrit language and the Ram Van Gaman Path (Lord Ram's route during his exile from Ayodhya); and protect India's sacred rivers through laws.

Nothing is wrong with the resolve but only if Muslims remember that in the previous assembly elections in Madhya Pradesh in 2013, Congress had a whole section on "Minority Community" in its manifesto. It had promised to provide special economic assistance to madrasas, new laws against communal violence and the implementation of the Sachar Committee recommendations.

Sachar Committee is an interesting moment of reflection. It was commissioned by then Prime Minister Manmohan Singh in 2005 to evaluate the status of Muslims in the country. Formed under former Chief Justice of Delhi High Court, Rajinder Sachar, and six other members (but for one, four were Muslims and one Christian) it gave a forceful report in support of Muslims, even going to the extent of devoting a good chunk on the supposed growth of Muslim population in India.

Sachar Committee found that Muslims constituted only 2.5 per cent of the Indian bureaucracy even though they were (then) 14% percent of the population. It stated the "backwardness" of Muslims and impediments in assimilating them in the economic, political and social mainstream of the country. Damningly, Sachar Committee concluded that the conditions facing Indian Muslims was below that of scheduled castes and scheduled tribes. (a passing query: Why committee on just one minority, what about others???)

If Muslims were in a worse state than Dalits, what was Congress doing in most of the 70 years it held India's reins? The truth is, even in 2014, Congress nominated very few Muslims in critical states like Delhi, Gujarat, Haryana, Karnataka, MP, Maharashtra, Odisha, Rajasthan and Tamil Nadu (Do you understand the Congress dilemma on AAP now? One might demand more and the other less Muslim candidature).

The photo-ops of Rahul Gandhi as a Hindu in recent times bear no repetition. In assembly elections in Gujarat, Madhya Pradesh and Rajasthan, Rahul Gandhi lost no opportunity to visit temples and present himself as a janeudhari Shiv-bhakt. Rahul Gandhi's soft Hindutva politics is lost on no one.

If nothing else, Muslims of this country should look at the scenario in Uttar Pradesh. Even an avowed Muslim-supporting Samajwadi Party isn't afraid of Congress for their vote banks. They know a hypocrite party like Congress wouldn't cut into their Muslim base in the state. They have dropped them with impunity, nudged of course by Mayawati's BSP.

So my Muslim brethren, look at Congress manifesto closely this time. Soft HIndutva or Muslim protectors? Or none but the goal of power? You would have your answers.

Related Topic(s): Assembly; Bureaucracy; Hypocrite; Indian Prime Minister Modi; Muslim; Polls; Population, Add Tags
Add to My Group(s)
Go To Commenting
The views expressed herein are the sole responsibility of the author and do not necessarily reflect those of this website or its editors.