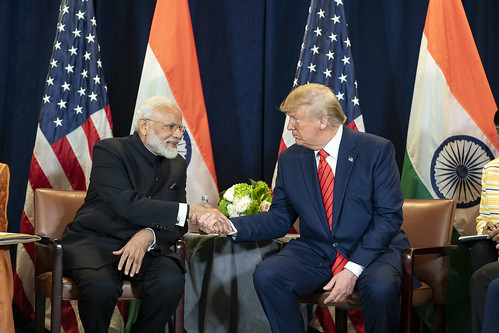 What has gotten less scrutiny is his trade war with India. That is unfortunate. That trade war has the potential to be almost as devastating to U.S. exports and its overall economy as the trade war with China. Because India's is the fastest growing economy in the worldthe sixth largest in terms of GDP, and expected to overtake the United Kingdom for fifth place this year. India is not a trading partner the U.S. should abandon.

Under the President's orders, the United States ended its preferential trade treatment for India in June, removing it from the Generalized System of Preferences (GSP) program that permitted duty-free entry for more than $5.5 billion of India's exports to the U.S. annually.

Just as China imposed countermeasures on the President's tariffs on Chinese goods, hurting American producers and exporters of fish, nuts, soybeans, and vehicles and their workers, India retaliated against 28 U.S. products including almonds, apples, and walnuts, harming those goods' producers, exporters, and workers as well.

That roused even typically Trump-loving Republicans in Congress to join Democrats in a Sept. 19 letter by 44 Congressmen to U.S. Trade Representative Robert Lighthizer, which noted that "American companies are and workers also are harmed by new tariffs due to the GSP termination," and that many American jobs depend on trade between India and the U.S.

The Trump Administration was unimpressed by this rare example of bipartisanship.

"If a country consumes more than it produces," said Republican former Secretary of State George Schultz, "it must import more than it exports. That's not a rip-off; that's arithmetic."

It's also a matter of arithmetic that the media and the public has a hard time keeping up with everything the Trump Administration is doing, so many actions get lost because they just do not make the top one or two news stories of the day. Sanctions against India not getting much media play is therefore yet another matter of arithmetic.

Yet another matter of arithmetic is that as the numbers of U.S. exports to India decrease, the numbers of underemployed or unemployed workers and the numbers of goods sitting with no market go upas do the odds of a recession.

The President is unlikely to prevail against that trio, but so far he is winning in his effort to keep the media and the public from paying attention to his trade war against India. It is the economies of the U.S. and India who may be the ultimate losers.

William S. Bike is Senior Vice President of ANB Communications, a communications consulting and political consulting firm based in Chicago. Bike has worked in journalism, public relations, and politics since 1979 and is the former Communications (more...)
Related Topic(s): Bipartisanship; Economy; Exports; Markets; Sanctions; Sanctions; Tariffs; Tariffs; Trade; Trade Barriers; (more...) Trade Restrictiveness; Trump, Add Tags  (less...)
Add to My Group(s)
Go To Commenting
The views expressed herein are the sole responsibility of the author and do not necessarily reflect those of this website or its editors.