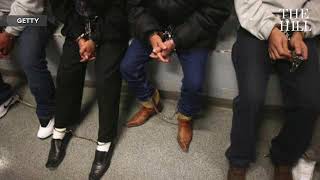 Pursuant to its "zero-tolerance" policy, the Trump administration separated some 2,300 migrant children from their parents at the US-Mexico border since May 5, 2018. Widespread international condemnation ensued. On June 26, a federal judge in San Diego ordered the government to reunite the families and established a timetable for reunification.

On June 29, the Department of Justice filed a notice of compliance with the court order, but indicated its intention to indefinitely detain families together. Indefinite detention violates international law.

"The Government will not separate families but detain families together during the pendency of immigration proceedings when they are apprehended at or between ports of entry," the Justice Department wrote in its notice of compliance.

That would amount to indefinite detention as immigration cases can last for months or even years.

Meanwhile, on July 2, a federal judge in Washington ordered the government to give asylum applicants a meaningful opportunity to be released. More than 1,000 applicants have been incarcerated for months or years with no resolution of their cases.

Indefinite detention violates the International Covenant on Civil and Political Rights, the Refugee Convention and the Convention on the Rights of the Child.

A Violation of the Covenant on Civil and Political Rights

The United States has ratified the International Covenant on Civil and Political Rights, making its provisions part of US law under the Supremacy Clause of the Constitution, which says treaties "shall be the supreme law of the land."

The UN Human Rights Committee is the expert body that monitors compliance with the covenant.* The committee has stated that detentions are arbitrary if they do not accord with due process and are manifestly disproportional, unjust or unpredictable.

Indeed, according to the UN Working Group on Arbitrary Detentions, under the covenant, "'arbitrariness' is not to be equated with 'against the law,' but must be interpreted more broadly to include elements of inappropriateness, injustice, lack of predictability and due process of law."

Keeping families locked up for months with no good reason is unjust and inappropriate. It denies them due process and a timely resolution of their legal claims. And their time of release is unpredictable.

Moreover, the Human Rights Committee has said that even if detention is initially legal, it could become "arbitrary" if unduly prolonged or not subject to periodic review.

People deprived of their liberty are entitled to a speedy trial. When they are arbitrarily detained, they have the right to compensation under the covenant.

Related Topic(s): Immigration; Indefinite Detention; Injustice; Laws; Migrant Children; Parents, Add Tags
Add to My Group(s)
Go To Commenting
The views expressed herein are the sole responsibility of the author and do not necessarily reflect those of this website or its editors.