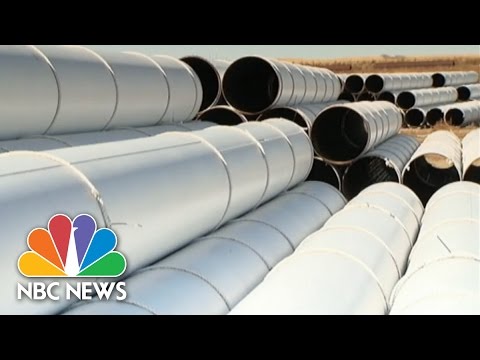 Around the world, people are rising to the occasion of the coronavirus pandemic with acts of kindness, sacrifice, and love that remind us why we're a species worth fighting for. And then there's the oil industry. Over the past few weeks, it has been working to push through construction of the Keystone XL pipeline. The effort began in earnest in mid-March, when several states -- including, crucially, South Dakota, which is on the KXL route -- passed laws designating pipelines as "critical infrastructure." South Dakota's governor went further last week, signing a law that could charge anyone who, with three or more others, acts to cause "damage to property" as a rioter, and made it a felony to "incite" such behavior.

On Monday, Jason Kenney, the premier of Alberta, where the pipeline originates, announced that his government would hand over $1.1 billion dollars to TC Energy, the company building the pipeline. That is enough to cover construction costs for the rest of the year. In addition, Kenney put forward $4.2 billion in credit guarantees, and that was enough for the company, which had been unwilling to commit to the project, to go forward. Now, the company says, construction will begin immediately, both in Canada and across the border. Indeed, it appears that construction workers began arriving in Montana before the state announced a 14-day quarantine on travelers arriving from out of state.

So here's the situation: in the middle of a pandemic, construction workers will move into isolated rural communities with already strained hospital resources. The "man camps" where many such workers in the industry live are associated with violence against women and other crimes, even in the best of times. Now, with the pandemic, many of the Native communities that live along the pipeline route fear for the worst. "This causes eerie memories for us with the infected smallpox blankets that were distributed to tribes intentionally," Faith Spotted Eagle, a leader of the Yankton Sioux Tribe, said. (The coronavirus is already wreaking havoc on isolated reservations in other parts of the country, and the chronically underfunded Indian Health Service is struggling to meet the crisis.)

TC Energy insists that it is building the pipeline now because it will "strengthen the continent's energy security," but that's obvious nonsense -- at the moment, a record glut of oil is so overwhelming the market that there's literally no place left to store it, and Texas (where the Keystone pipeline will terminate) is considering limiting oil production for the first time in 50 years. It's impossible to think of a less critical thing to be building right now, when we've theoretically stopped every business that isn't "essential."

Another reason the construction might be able to go ahead now is that there is no one to stop it. Since the fight against Keystone XL began, a decade ago, with a handful of indigenous activists and Nebraska ranchers, it's grown into a truly mass protest. At first, few thought that the environmentalists had any hope of winning -- a poll of "energy insiders" in 2011, conducted shortly after 1,253 people were arrested in protests in Washington, D.C., over the course of two weeks, found that "virtually all" of them thought that the company, which was then called TransCanada, would soon have its permit. (350.org, a group I co-founded, helped coördinate the events.) But, after more than four years of protests, President Obama announced that he would not grant the permit -- news that dominated the front pages of newspapers across the country. The movement attracted many people well beyond those along the pipeline's route -- many, perhaps most, were drawn by concern about climate change, after the NASA scientist James Hansen pointed out that draining Alberta's vast tar-sands complex would drive atmospheric concentrations of carbon dioxide above 500 parts per million, signalling "game over" for the climate.

Four days after President Trump took office, he tried to clear the way for construction to begin again, but, with oil prices tanking, it didn't happen. (At the moment, West Canada Select, the incredibly dirty tar-sands oil, is worth about four dollars a barrel; it takes a petrostate like Alberta, not a private company, to proceed in those conditions.) It was clear that any action would be met with protest, much like the standoff at Standing Rock that greeted construction of the Dakota Access pipeline, in 2016. But people had had much longer to prepare this time, and many thousands had signed a "Promise to Protect" pledge, and undergone strict civil-disobedience training. But, of course, no one should be travelling to rural areas now to protest. Litigators from groups like the Sierra Club and Bold Nebraska are fighting with lawsuits -- TC Energy still has to get some permits from states along the routes, including to build the man camps. But it is at least possible that it will manage to get the pipeline built.

If that happens, the protests of the past decade will still not have been in vain. The Keystone fight showed that big oil could be held to a draw, and ever since people have been battling pretty much every other piece of fossil-fuel infrastructure. Many of those fights have been won, and even when they were lost they've delayed construction for months or years, giving engineers more time to drive down the costs of solar and wind power.

If the pipeline does get built, it will also serve as a seventeen-hundred-mile-long monument to the power of political influence. Russ Girling, the C.E.O. of TC Energy, thanked not only Premier Kenney but also President Trump, "as well as many government officials across North America for their advocacy without which, individually and collectively, this project could not have advanced." Truer words are rarely spoken.

I don't know if corporations can be evil -- I don't think so, even if the Supreme Court insists on describing them as people. But this is capitalism at its most naked, willing to endanger people in the Covid-19 crisis and to heat the earth in the climate crisis, all in search of a bit more profit. In a world running right now on bravery and love, it's hard to imagine anything much darker.

A Guide to the Coronavirus

Bill McKibben is the author of a dozen books, including The End of Nature and Deep Economy: The Wealth of Communities and the Durable Future. A former staff writer for The New Yorker, he writes regularly for Harper's, The Atlantic Monthly, and The (more...)
Related Topic(s): Canada; Climate; Construction Workers; Corona Virus Coronavirus Covid-19; Keystone Xl Pipeline; NASA; Oil; Protest, Add Tags
Add to My Group(s)
Go To Commenting
The views expressed herein are the sole responsibility of the author and do not necessarily reflect those of this website or its editors.