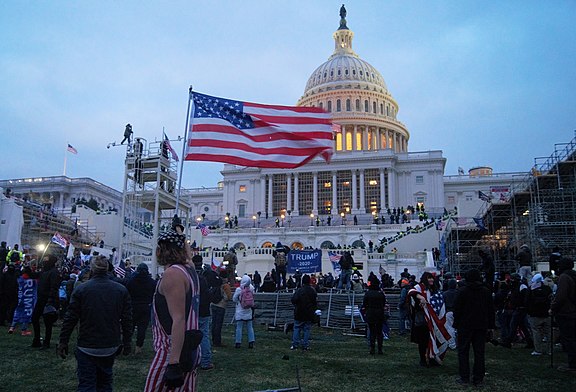 Republicans in Congress would have the country believe that the Constitution will remove Donald Trump on January 20th. But Trump's contempt for the Constitution casts a deep, dark shadow of doubt.

Trump has made clear from the start of his first presidential campaign in 2015 that he had no patience with any law that would constrain him and the only law he saw fit to follow was his own. We have been reminded of his willingness to trample the law and the Constitution on countless occasions over the past four years. His literal assault on the Capitol being the just most recent and consequential example.

President-elect Joe Biden called what occurred at the American Capitol in Washington, DC, an "insurrection." Many global security analysts are describing it as a coup d'e'tat, if a failed one. Both terms adequately convey the gravity of what occurred and make clear what may await us in the remaining roughly nine days of Trump's still not dead presidency.

It would seem that Trump is hung up on a sandbar in the middle of the Rubicon with his ragtag white American militias in tow, having begun a treasonous crossing, failed, but remaining still in power. Unable to retreat from what he has attempted and thwarted from completing his coup, he cannot go forward or back.

Who believes that Trump has seen the light and will now quietly let power slip from his grasp? It's not very likely. He has the same three options now that he has had all along in terms of circumventing the November election and maintaining his grip on power. The first is a military takeover. The second is a legal or legislative coup. The third is a literal coup by means of a popular uprising.

A military takeover would require the participation, unsurprisingly, of the military. Fortunately for American Democracy, the people at the Pentagon seem quite a bit more fond of the Constitution than Trump does. The signals Pentagon officials are sending would appear to indicate they are willing and able to maintain their position until January 21st.

Meanwhile, back at the never dull Capitol, there are Trump loyalists in Congressional member's clothing who lurk about. Lacking a majority, they too seem to sit beside their commander on the Rubicon sandbar searching for a way to complete the crossing.

Which leaves the popular uprisers. This was always the greatest danger. The self-styled, self-regulated militias, often comprised of military veterans but acting without formal military oversight, are capable of much and controlled by little.

As the invaders of the Capitol were heard to say as they left, "We'll be back." Back to the Capitol in Washington, DC? Salem, Oregon? Lansing, Michigan? Phoenix, Arizona? There have already been multiple incursions at all of those places. Always armed.

So it would seem necessary for government installations, federal and state, to be on a heightened state of alert. Those are the most likely targets between now and January 20th, and perhaps beyond.

Trump should never have attempted the crossing of the Rubicon. But now that he's hung up in the middle, it is imperative to keep him there.

Related Topic(s): Capitol; Coup; Presidency; Republican; Trump, Add Tags
Add to My Group(s)
Go To Commenting
The views expressed herein are the sole responsibility of the author and do not necessarily reflect those of this website or its editors.