Devinder Sharma is not only an award-winning journalist, writer, and researcher on food and trade policy, but an agricultural expert and an on the ground organizer of Indian farmers. He wrote "GATT and India -- Politics of Agriculture" (1994) and "In the Famine Trap" (1997) and chairs the New Delhi-based Forum for Biotechnology & Food Security.

As bogus "food safety" bills are being rammed through Congress by friends of Monsanto such as Rosa DeLauro, it seems the right time to look more carefully at Monsanto itself and what is has already done to "food safety' around the world.  Devinder Sharma's article on the reaction in India to Mahesh Bhatt's new film, "Poison on the Platter," gives us not only a view of Monsanto's genetic engineering, the corruption of the political and scientific process, the already apparent harm from GMOs, but strong public revulsion at it.

Michael Taylor, the Monsanto lawyer whom Bill Clinton put in charge of the FOOD and Drug Administration and who subjected the whole populace to rBGH despite its link to increased risks of cancers (thus altering milk, cheese, ice cream, yogurt and an all processed foods using milk solids of any kind - food particularly given to children) showed up on Obama's transition team.

Were he and Vilsack and Monsanto "not-food-safety-on-your-life" bills, the compromise Hillary Clinton and her campaign strategist, Mark Penn (CEO of a huge Monsanto's PR firm) demanded?

In any case, let's honor this colossal corruption of our government and Hillary Clinton managing to pull the wool over American feminists' eyes in making them think she cares the least bit about women and children, and applaud "Poison On The Platter," the reality of Monsanto's GMOs.

Say no to GM food, for it's poison: Bhatt 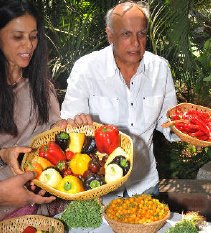 In the picture above, film maker Mahesh Bhatt talking about nature's bounty, before the screening of his documentary film "Poison on the platter" at Bangalore on Mar 7, 2009. Along with him is Sangita Sharma, director of the Annadana Soil and Seed Savers, which hosted the film launch at an impressive ceremony in Bangalore.

The film launch drew a wide cross-section of Bangalore's society. Among those who attended were MLAs, senior bureaucrats, former vice-chancellor of the agriculture university, agricultural officials, army officers, film stars, theatre personalities, senior editors, principals and teachers of city colleges and schools, general managers of hotel chains, NGOs and young students from colleages among other citizens.

As witnessed in the previous launches, the film opened to a packed house, and drew a loud round of applause. And it generated so much of concern that people clamoured for multiple copies of the DVD for screening at various places. The Times of India news report below captures the essence. Reports have appeard in several newspapers but I have access to only this newspaper. I am therefore reproducing the report below. A day after the launch, the film was screened at a farmers event in Tumkur (Karnataka).

Says Krishna Prasad, director of Sahaja Samrudha: "This film has come as an important advocacy tool. We will take the message to the masses."

The Bangalore event also marked the launch of a My Right To Safe Food campaign. Mahesh Bhatt formally launched the campaign by releasing the booklet on My Right to Safe Food. It simplifies the complex and scientific issue for the man on street, and also addresse some frequently asked questions.

Here is the TOI news report:

Say no to GM food, for it's poison: Bhatt

Bangalore: The long-drawn debate on commercialization of genetically modified food has intensified just as the government is set to hit the last nail in the coffin. Food policy analyst Devinder Sharma says genetically modified Bt Brinjal is likely to enter the market in May. Noted film-maker Mahesh Bhatt released his documentary 'Poison on the platter' and launched a My Right Safe Food campaign in the city on Saturday.

Met libertarian and conservative farmers and learned an incredible amount about farming and nature and science, as well as about government violations against them and against us all. The other side of the fence is nothing like what we've been (more...)
Related Topic(s): Biodiversity; Biotechnology; Colonialism; Death; Disasters; Famine; Food Contamination; Food Industry- Industrial; Food Safety; Food-Agriculture; (more...) Gmo; Ignorance; Loopholes; Memory; Monsanto; Privatization; Safety Lapses; Trade, Add Tags  (less...)
Add to My Group(s)
Go To Commenting
The views expressed herein are the sole responsibility of the author and do not necessarily reflect those of this website or its editors.

Monsanto Investigator in Illinois Laughs They Are Doing 'Rural Cleansing'

A solemn walk through HR 875