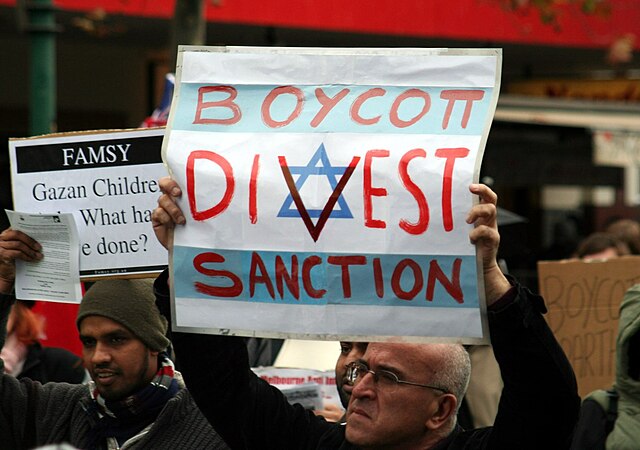 A FEDERAL JUDGE on Tuesday ruled that a Kansas law designed to punish people who boycott Israel is an unconstitutional denial of free speech. The ruling is a significant victory for free speech rights because the global campaign to criminalize, or otherwise legally outlaw, the Boycott, Divestment, and Sanctions movement has been spreading rapidly in numerous political and academic centers in the U.S. This judicial decision definitively declares those efforts -- when they manifest in the U.S. -- to be a direct infringement of basic First Amendment rights guaranteed by the U.S. Constitution.

The enjoined law, enacted last year by the Kansas legislature, requires all state contractors -- as a prerequisite to receiving any paid work from the state -- "to certify that they are not engaged in a boycott of Israel." The month before the law was implemented, Esther Koontz, a Mennonite who works as a curriculum teacher for the Kansas public school system, decided that she would boycott goods made in Israel, motivated in part by a film she had seen detailing the abuse of Palestinians by the occupying Israeli government, and in part by a resolution enacted by the national Mennonite Church. The resolution acknowledged "the cry for justice of Palestinians, especially those living under oppressive military occupation for fifty years"; vowed to "oppose military occupation and seek a just peace in Israel and Palestine"; and urged "individuals and congregations to avoid the purchase of products associated with acts of violence or policies of military occupation, including items produced in [Israeli] settlements."

A month after this law became effective, Koontz, having just completed a training program to teach new courses, was offered a position at a new Kansas school. But, as the court recounts, "the program director asked Ms. Koontz to sign a certification confirming that she was not participating in a boycott of Israel, as the Kansas Law requires." Koontz ultimately replied that she was unable and unwilling to sign such an oath because she is, in fact, participating in a boycott of Israel. As a result, she was told that no contract could be signed with her.

Related Topic(s): Boycotting Israel; Court Order; Freedom; Israeli Pressure On US; Lawsuits; Punishing Protesters, Add Tags
Add to My Group(s)
Go To Commenting
The views expressed herein are the sole responsibility of the author and do not necessarily reflect those of this website or its editors.