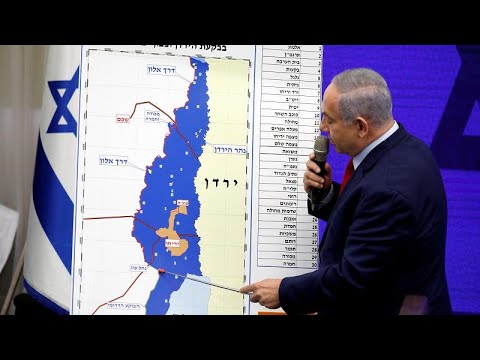 Interim Israeli Prime Minister Binyamin Netanyahu committed again on Sunday that his government will steal the entire Jordan Valley from the Palestinians. He had floated this plan two months ago but now seems to be determined to move ahead. It makes up 25% of the Palestinian West Bank. Israel is forbidden to annex militarily occupied territory by the 1949 Geneva Convention and by the charter of the United Nations, which were enacted to forestall a repeat of Nazi atrocities. Netanyahu would also annex the 5% of Palestinian territory on which Israeli squatter settlements have been built on land stolen from its Palestinian owners.

Netanyahu is in a world of trouble. He has been indicted on criminal offenses. The only thing that might keep him out of jail is to stay in office and tinker with the law for his own benefit. But he can't remain prime minister because he lost the last election and hasn't been able to form a government.

You don't need to be a really suspicion person to see this announcement as a form of wagging the dog by Netanyahu in hopes of making himself so popular in Israel that he can manage to find a way to fix the system and stay out of jail. Of course, he has made this pledge before, and he nevertheless couldn't win the election and form a government.

It is rumored that Trump will announce his support for Netanyahu's massive piece of grand larceny. Trump made waves of his own Sunday, addressing a Jewish audience and telling them that they are "not nice people" but that they will vote for him because they care about money above all else and will reject Elizabeth Warren's plan to raise taxes. He also insisted that Jewish Americans must give Israel their blind support. He managed to hit all the highlights of anti-Semitism, from caricatures of Jews as money-grubbers with no thought for the public weal to inaccurate charges of dual loyalty.

Israel may well go to the polls again for a third time in a year this spring. The electorate is divided between the far-far-right Likud Party of Netanyahu and the center-right Blue and White coalition of Benny Gantz. So it keeps returning a hung parliament. Gantz refuses to form a government of national unity with Netanyahu. Actually, either of the two blocs could form a government if they allied with the largely Palestinian-Israeli Joint List, but the racist rules of Israeli politics do not permit allowing persons of Palestinian heritage into the cabinet.

If Netanyahu loses again, it is possible that his party will dump him or that his enemies will form a government without him, leaving him in the dragnet of the police.

I explained earlier two of the cases against him:

In one case, Netanyahu allegedly accepted a couple hundred thousand dollars in bribes from an Australian businessmen in return for favorable treatment of his business and attempting to get him a US visa.

In the other case, Netanyahu is alleged to have offered a deal to Arnon Mozes, the publisher of Israel's biggest-circulation newspaper, Yedioth Ahronoth. Netanyahu supporter and shady casino billionaire Sheldon Adelson had begun a free pro-Netanyahu newspaper, Yisrael Ha-Yom, and it obviously was eating into the profits of the other newspapers in the country. (How this is not illegal as "dumping" baffles me.) Netanyahu allegedly told Mozes that he could persuade Adelson to reduce the publication run of Yisrael Ha-Yom, which would help his bottom line. In return, Mozes should report more favorably on Netanyahu.

This second case really is about destroying freedom of the press and entirely undermining what little is left of Israeli democracy.

Israel never had a claim on the Palestinian West Bank or the Gaza Strip. In 1967 Israel invaded these areas and occupied them even though the Palestinians took no role in the 1967 War. Nearly 3 million Palestinians now live in the West Bank under Israeli military control. Another 2 million live in the Gaza Strip, which is occupied via blockade. Violating international law, Israel long since annexed some of this Palestinian territory and added it to the Israeli district of Jerusalem, settling some 350,000 Israelis on this stolen Palestinian land. Israel has also sent 400,000 squatters to take property away from Palestinian families in what is left of the West Bank.

Now Netanyahu is brazenly planning to steal a quarter of all the land in the Palestinian West Bank, forever ending any chance of a Palestinian state.

The US Congress, which tacitly supports Israeli colonization efforts, has clung to a fig leaf of an imaginary peace process and a two-state solution for decades during which far right wing Israeli governments have energetically worked to forestall any such thing.

Related Topic(s): Israeli Attacks On Gaza; Israeli Elections; Israeli Pressure On US; Israeli Settlements; Israeli-palestinian; Likud; Netanyahu Indicted, Add Tags
Add to My Group(s)
Go To Commenting
The views expressed herein are the sole responsibility of the author and do not necessarily reflect those of this website or its editors.