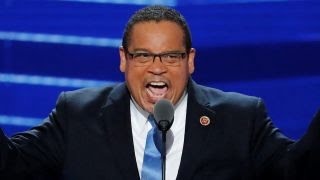 In a little noticed but potentially monumental development, the House of Representatives voted unanimously for an amendment to the National Defense Authorization Act of 2019 (H.R. 5515) that says no statute authorizes the use of military force against Iran.

The amendment, introduced by Rep. Keith Ellison (D-Minnesota), states, "It is the sense of Congress that the use of the Armed Forces against Iran is not authorized by this Act or any other Act."

A bipartisan majority of the House adopted the National Defense Authorization Act on May 24, with a vote of 351-66. The bill now moves to the Senate.

If the Senate version ultimately includes the Ellison amendment as well, Congress would send a clear message to Donald Trump that he has no statutory authority to militarily attack Iran.

This becomes particularly significant in light of Trump's May 8 withdrawal from the Iran nuclear deal. That withdrawal was followed by a long list of demands by Secretary of State Mike Pompeo, which could set the stage for a US attack on Iran.

"The unanimous passage of this bipartisan amendment is a strong and timely counter to the Trump administration's withdrawal from the Iran deal and its increasingly hostile rhetoric," Ellison said in a press release. "This amendment sends a powerful message that the American people and Members of Congress do not want a war with Iran. Today, Congress acted to reclaim its authority over the use of military force."

Likewise, Khanna stated, "The War Powers Act and Constitution is clear that our country's military action must first always be authorized by Congress. A war with Iran would be unconstitutional and costly."

McGovern concurred, stating, "Congress is sending a clear message that President Trump does not have the authority to go to war with Iran. With President Trump's reckless violation of the Iran Deal and failure to get Congressional approval for military strikes on Syria, there's never been a more important time for Congress to reassert its authority. It's long past time to end the White House's blank check and the passage of this amendment is a strong start."

Moreover, the Constitution only grants Congress the power to declare war. And the War Powers Resolution allows the president to introduce US Armed Forces into hostilities or imminent hostilities only after Congress has declared war, or in "a national emergency created by attack upon the United States, its territories or possessions, or its armed forces," or when there is "specific statutory authorization."

But even if the Ellison amendment survives the Senate and becomes part of the National Defense Authorization Act, Trump would likely violate it. He could target Iranian individuals as "suspected terrorists" on his global battlefield and/or attack them in Iran with military force under his new targeted killing rules.

Unilateral Sanctions Against Iran Are Illegal

Although the Ellison amendment states that no statute authorizes the use of US armed forces in Iran, it does not prohibit the expenditure of money to attack Iran. Nor does it proscribe the use of sanctions against Iran.

In fact, other amendments the House adopted mandate the imposition of sanctions against Iran.

Related Topic(s): Attack On Iran; House Of Representatives; Iran Nuclear Deal; National Defense Authorization Act; Right Wing Hypocrisy; Sanctions, Add Tags
Add to My Group(s)
Go To Commenting
The views expressed herein are the sole responsibility of the author and do not necessarily reflect those of this website or its editors.