Click Here to Remove All Ads
Source: The Guardian
The richest land on Earth writes Aboriginal people out of history and pushes them to the margins. Like South Africa 30 years ago 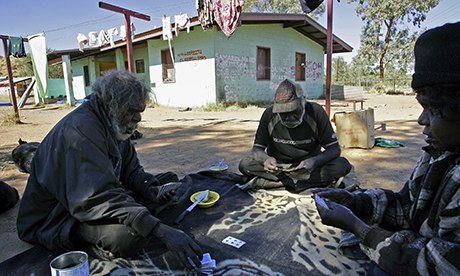 (Image by Unknown Owner)   Details   DMCA
Aboriginal elders playing cards in their camp near Alice Springs. "A typical, dilapidated house in an outback indigenous community must accommodate as many as 25 people. Families, the elderly and disabled people wait years for sanitation that works." Photograph: Anoek De Groot/AFP/Getty Images

The corridors of the Australian parliament are so white you squint. The sound is hushed; the smell is floor polish. The wooden floors shine so virtuously they reflect the cartoon portraits of prime ministers and rows of Aboriginal paintings, suspended on white walls, their blood and tears invisible.

The parliament stands in Barton, a suburb of Canberra named after the first prime minister of Australia, Edmund Barton, who drew up the White Australia Policy in 1901. "The doctrine of the equality of man," said Barton, "was never intended to apply" to those not British and white-skinned.

Barton's concern was the Chinese, known as the yellow peril; he made no mention of the oldest, most enduring human presence on Earth: the first Australians. They did not exist. Their sophisticated care of a harsh land was of no interest. Their epic resistance did not happen. Of those who fought the British invaders of Australia, the Sydney Monitor reported in 1838: "It was resolved to exterminate the whole race of blacks in that quarter." Today, the survivors are a shaming national secret.

The town of Wilcannia, in New South Wales, is twice distinguished. It is a winner of a national Tidy Town award, and its indigenous people have one of the lowest recorded life expectancies. They are usually dead by the age of 35. The Cuban government runs a literacy program for them, as it does among the poorest of Africa. According to the Credit Suisse Global Wealth report, Australia is the richest place on Earth.

Politicians in Canberra are among the wealthiest citizens. Their self-endowment is legendary. Last year the then minister for indigenous affairs, Jenny Macklin, refurbished her office at a cost to the taxpayer of $331,144. Macklin recently claimed that in government she had made a "huge difference." This is true. During her tenure, the number of Aboriginal people living in slums increased by almost a third, and more than half the money spent on indigenous housing was pocketed by white contractors and a bureaucracy for which she was largely responsible. A typical, dilapidated house in an outback indigenous community must accommodate as many as 25 people. Families, the elderly and disabled people wait years for sanitation that works.

In 2009 Professor James Anaya, the respected UN Rapporteur on the rights of indigenous people, described as racist a "state of emergency" that stripped indigenous communities of their tenuous rights and services on the pretext that paedophile gangs were present in "unthinkable" numbers -- a claim dismissed as false by police and the Australian Crime Commission. The then opposition spokesman on indigenous affairs,Tony Abbott, told Anaya to "get a life" and not "just listen to the old victim brigade." Abbott is now the prime minister of Australia.

I drove into the red heart of central Australia and asked Dr Janelle Trees about the "old victim brigade." A GP whose indigenous patients live within a few miles of $1,000-a-night resorts serving Uluru (Ayers Rock), she said:

"There is asbestos in Aboriginal homes, and when somebody gets a fibre of asbestos in their lungs and develops mesothelioma, [the government] doesn't care. When the kids have chronic infections and end up adding to these incredible statistics of indigenous people dying of renal disease, and vulnerable to world record rates of rheumatic heart disease, nothing is done. I ask myself: why not?

"Malnutrition is common. I wanted to give a patient an anti-inflammatory for an infection that would have been preventable if living conditions were better, but I couldn't treat her because she didn't have enough food to eat and couldn't ingest the tablets. I feel sometimes ... as if I'm dealing with similar conditions as the English working class at the beginning of the industrial revolution."

In Canberra, in ministerial offices displaying yet more first-nation art, I was told repeatedly how "proud" politicians were of what "we have done for indigenous Australians." When I asked Warren Snowdon -- the minister for indigenous health in the Labor government recently replaced by Abbott's conservative coalition -- why after almost a quarter of a century representing the poorest, sickest Australians, he had not come up with a solution, he said: "What a stupid question. What a puerile question."

At the end of Anzac Parade in Canberra rises the Australian National War Memorial, which the historian Henry Reynolds calls "the sacred centre of white nationalism." I was refused permission to film in this great public place. I had made the mistake of expressing an interest in the frontier wars in which black Australians fought the British invasion without guns but with ingenuity and courage -- the epitome of the "Anzac tradition."

Yet, in a country littered with cenotaphs, not one officially commemorates those who fell resisting "one of the greatest appropriations of land in world history," wrote Reynolds in his landmark book Forgotten War. More first-Australians were killed than Native Americans on the American frontier and Maoris in New Zealand. The state of Queensland was a slaughterhouse. An entire people became prisoners of war in their own country, with settlers calling for their extinction. The cattle industry prospered using indigenous men virtually as slave labor. The mining industry today makes profits of a billion dollars a week on indigenous land.

Suppressing these truths, while venerating Australia's servile role in the colonial wars of Britain and the US, has almost cult status in Canberra today. Reynolds and the few who question it have been smeared and abused. Australia's unique first people are its Untermenschen. As you enter the National War Memorial, indigenous faces are depicted as stone gargoyles alongside kangaroos, reptiles, birds and other "native wildlife."

When I began filming this secret Australia 30 years ago, a global campaign was underway to end apartheid in South Africa. Having reported from South Africa, I was struck by the similarity of white supremacy and the compliance and defensiveness of liberals. Yet no international opprobrium, no boycotts, disturbed the surface of "lucky" Australia. Watch security guards expel Aboriginal people from shopping malls in Alice Springs; drive the short distance from the suburban barbies of Cromwell Terrace to Whitegate camp, where the tin shacks have no reliable power and water. This is apartheid, or what Reynolds calls "the whispering in our hearts."

Note: John Pilger's film Utopia, about Australia, is to be released in British cinemas on 15 November and in Australia in January. Watch the trailer to this critical film here.

John Pilger grew up in Sydney, Australia. He has been a war correspondent, author and documentary film-maker. He is one of only two to win British journalism's highest award twice, for his work all over the world. On 1 November, he was awarded (more...)
Related Topic(s): Australian Politics; Health; Indigenous Cultures, Add Tags
Add to My Group(s)
Go To Commenting
The views expressed herein are the sole responsibility of the author and do not necessarily reflect those of this website or its editors.