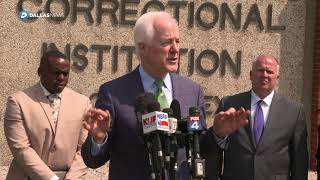 The House of Representatives this week passed a bipartisan criminal justice reform measure called the First Step Act by an overwhelming majority of 360-59. The bill was sponsored by Reps. Hakeem Jeffries (D-N.Y.) and Doug Collins (R-Ga.) It has the support of the left-leaning Brennan Center for Justice, the activist group Families Against Mandatory Minimums, and even presidential son-in-law Jared Kushner and Attorney General Jeff Sessions. Senate Majority Leader Mitch McConnell (R-Ky.), however, has already said that the bill is "dead on arrival" in the Senate.

What we need right now is real sentencing reform. We don't need half measures. We need reforms that will bring us in line with other "progressive" democracies. I'm a realist. I know that's not going to happen. There will never be a consensus in Congress over true reform. Maybe if we're really lucky -- someday -- we'll be able to do away with the draconian sentences that we have for nonviolent drug crimes. That'll be a start. But we're not there yet.

The First Step Act is not sentencing reform. It is, however, a giant leap in the right direction. It earmarks $250 million to be spent over five years on education and vocational training and on mental health care in federal prisons, in an effort to reduce recidivism. It expands the number of days that a prisoner would be eligible to spend in a halfway house or home confinement near the end of his prison sentence. It would ban the shackling of female prisoners during childbirth. And it would require that the Bureau of Prisons (BOP) place prisoners in facilities within 500 miles of their families. These aren't radical perks. These at least ought to be basic human rights. But they're not. And the bill would be in stark contrast to the realities of federal prison today.

First, there is simply no educational or vocational training in federal prisons. Once upon a time, a prisoner might be trained to do electrical work, plumbing, small engine repair, or even factory work, but today there is literally no money in the federal budget for such a program, despite the fact that the BOP accounts for fully one-quarter of the Justice Department's budget.

Second, although federal law calls for prisoners to earn 15 percent of the length of their sentence off for good behavior, the BOP has always calculated "good behavior time" differently. In the end, prisoners actually get 13.5 percent good behavior time. Furthermore, prisoners are technically eligible for up to 12 months of halfway house time and either 10 percent of the length of their sentence or 90 days, whichever is shorter, for home confinement or house arrest. In reality, though, you could count on one hand the number of federal prisoners who are given more than six months of halfway house time.

That's a shame. There's an institutional desire for punishment at the Justice Department and in Congress. There is little stomach or tolerance for "rehabilitation" or anything else that meets the Republican definition of being "soft on crime." What halfway house time is supposed to do is to give a prisoner nearing the end of his sentence the opportunity to find a job, transition back into society, and become a contributing member of that society. The prisoner pays 25 percent of his gross pay as "rent" for his halfway house bed, and he is then (theoretically) able to put food on the table and care financially for his family.

But it doesn't work that way. Halfway house time is somehow seen in Washington as a "reward." And why should criminals get a reward? It's not a reward, though. It is what an enlightened government ought to do to help put a citizen on his feet and to help ensure that he doesn't return to a life of crime. There's no downside.

The House's work on the First Step Act is done. President Trump has said that he would sign the bill into law. Mitch McConnell, though, doesn't have control of his own caucus. Senate Democrats are united in their support for the bill. The Republican caucus is split. In raw numbers, there are more than enough votes to pass the bill into law. But Senator Tom Cotton (R-Ark.), one of the most extreme right-wing members of that body, is having none of it. Because of Cotton's opposition, and the opposition of several other southern conservatives, McConnell can't call the bill to a vote. Cotton won't even allow a vote in the Judiciary Committee. And because of that, the bill is dead. It's the third time in the past six years that a popular bipartisan prison reform bill will die in the Senate.

There's no good news here. Because our elected officials can't get their collective act together, no incarcerated Americans will catch a break. More importantly, recidivism will remain at one of the highest rates in the industrialized world. If a person goes to prison, does his entire stretch with little chance of meaningful time off for good behavior, has no education or job skills, and no hope for a job when he's released, what does he do? He goes right back into a life of crime.

Related Topic(s): First Step Act; McConnell-Mitch; Prisoners; Punishment; Republican; Rights; Support, Add Tags
Add to My Group(s)
Go To Commenting
The views expressed herein are the sole responsibility of the author and do not necessarily reflect those of this website or its editors.