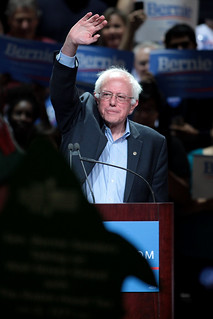 Bernie is that rare bird, an honest politician. He has integrity. In this day and age, with corporations pulling the strings of the executive, legislative and judicial branches of our government, he refuses corporate money. He sees elected office as a chance to serve the people, and relies on the people's money to put him in office. He has served in the US Congress for 16 years and in the Senate for 10, and has not gained personal wealth- his net worth is listed as $160,000. http://media.cq.com/50Richest/ Obviously, he has not taken bribes,- neither directly, nor in the form of high speaking fees.

He is independent in his thinking and actions, not beholden to big donors, and not hewing to any party line. Bernie was elected to Congress as an In-dependent, and only recently joined the Democratic Party in order to have access to the presidential primaries and candidate debates,- with wild success, so far.

He is idealistic, and has retained his idealism despite 25 years in Washington, DC. The bodysnatchers never got Bernie. At the same time, he is intensely practical, as his political success demonstrates.

Bernie is a gentleman, very gracious to his opponents, as he has repeatedly shown in the debates. He refuses to attack others personally, in marked contrast to most other presidential candidates. At the same time, he is tough, vigorously refuting false allegations. He is suing the Democratic National Committee over misuse of voter lists.

Above all, Bernie has courage. When a student at the University of Chicago, he was an organizer for the Student Nonviolent Coordinating Committee, and participated in sit-ins to integrate the dormitories. In 2010, he filibustered for more than eight hours against the extension of Bush era tax cuts for the wealthy. Last September, he gave a speech at Liberty University, an evangelical college, seeking common ground with those most likely to disagree with him. And it certainly takes courage to call oneself a socialist while running for president of the United States!

I could go on and on about Bernie's good traits- humility, sense of humor, straightforwardness. To summarize- he has a good character. He is trustworthy. He is who he says he is, without a hidden agenda. He's nobody's puppet.

Moving on to politics, the arena which gets most attention, I find I agree with most of Bernie's views and priorities. With no access to his inner circle, I'm guessing that the campaign priorities are somewhat strategic. For now, he is avoiding the most controversial issues of foreign policy, although it's clear that he views war as a last resort, and believes in talking things out with one's enemies. There's a lot of focus on compassion, for immigrants and refugees.

He is putting the economic plight of most Americans in center stage. This is appropriate, since transferring wealth from the populace to the wealthy few has been the main agenda of national politicians for the last few decades. In pledging to reverse the trend by breaking up banks, restructuring taxes, and overturning Citizens United, Bernie has won my appreciation, and that of millions of other voters.

I also like his strong focus on the environment, education, and universal health care. As a practicing physician, I and my secretary wrestle daily with the complications of insurance plans and pharmaceutical programs. The easiest third party payor to deal with, by far, is MediCare. The overhead of the health care sector of the economy would be greatly decreased by single payer health care- Medicare for all.

Bernie's biggest strength, and also his biggest vulnerability, is his idealism. As Hillary points out, his vision is very different from the current reality, and he has not really offered a way of getting from here to there.

There's only one answer- give him a likeminded Congress to work with. And so I'll end this essay with a plea to all you Bernie supporters out there to check out your Congressional and Senatorial candidates, and push for those who will work with Bernie Sanders when he becomes president.

Carol S. Wolman, MD is a psychiatrist in Northern California. A lifelong peace activist, she is helping to distribute a Peace Plan for the Holy Land- email her for a copy. She also a film producer with Paradise Cove Productions, currently (more...)

Related Topic(s): Courage; Policies; Support Of The People, Add Tags
Add to My Group(s)
Go To Commenting
The views expressed herein are the sole responsibility of the author and do not necessarily reflect those of this website or its editors.

Breaking the Spell with 9-11 Truth

Why the resistance to 9-11 truth?- UPDATE

Trump vs the People: A Psychiatrist's Analysis