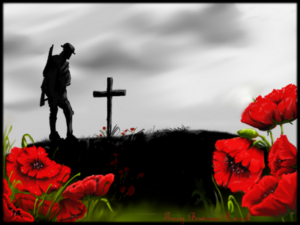 Most celebrated Memorial Day Monday as a summer kick-off, paid vacation day from work, with burgers and brats on the grill, blockbuster movie releases, breaking out a fresh tube of sunblock or packing up a picnic basket for the park.

But for our troops in Afghanistan, Iraq, and in older theaters in the never-ending American wars there was little to cheer about.

When Canadian Lt. Col. Jon McCrae wrote of red poppies that bloomed across the bloody battlefields of Flanders in World War I, the physician-turned-poet could not have imagined the carnage that faced future soldiers in the Bush Crime Family's terror wars of the 21st century.

The end of this summer will be marked by the 10th anniversary of the terrorist attack of 9-11-2001. Also the 10th anniversary of our "shock and awe" carpet bombing of Afghanistan. Flash-forward a decade, Osama bin Laden is dead -- thousands of US troops are maimed and killed. In an unrelated counter-strike Iraq has been invaded, devastated, and decimated; Saddam Hussein is dead, too. So are his kids. And yet, according to the Obama administration, this ill-defined "victory" in the "war on terror" has yet to be accomplished.

What have we accomplished in this latest bloody excursion in American/Western hegemony? What have we learned since Flander's field?

We have certainly learned how to make Muslims hate us like never before. That's "mission accomplished" for sure.  Nothing like Bush/Cheney/Rummy to make otherwise peaceful followers of Islam turn vigilante when members of their families are raped, imprisoned, beaten and/or murdered for no reason, other than because they follow the "wrong" religion and live in the "wrong" part of the world.

And we've learned a great deal about PTSD. How cognitive dissonance on the battlefield -- killing innocents simply because they're there -- has engendered a generation (or two) of mentally disturbed war veteran/victims, returning home to be plagued with nightmares from the killing field, to abuse their families, become homeless, kill themselves, or suffer numerous other physical and mental disorders.

Was it worth it, Truthseekers? The carnage, the needless death, dismemberment, and torture? The end of the idealized dream of American freedom?

Kathy never expected a career in radio as a talk show producer. Born and raised in Atlanta, Georgia, Kathy was completing her nursing degree when in 2001 - in an emergency - she was asked to fill in as the producer of Mike's program. Within a few (more...)
Related Topic(s): Afghanistan; Families; Killing; Soldiers; Wars, Add Tags
Add to My Group(s)
Go To Commenting
The views expressed herein are the sole responsibility of the author and do not necessarily reflect those of this website or its editors.