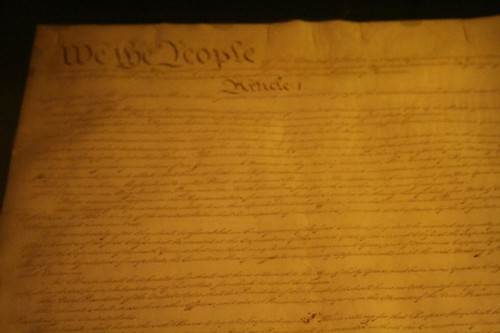 constitution
(Image by stefanie says)   Details   DMCA
>
Joe Giambrone
July 4, 2016
We face many problems; most stemming from ideologies run amok. Ideology is the enemy of truth, and the truth is larger and counter to all ideological frameworks, paradigms, religions, and dogmas. The truth cares nothing at all for your ideology nor for you; it never did, and it never will.
America has never lived up to the myth. Dumbed-down nationalism has always displaced reason, evidence, and fairness, even among the masses. Thus the term "Exceptionalism" is shouted from the think tanks without a hint of irony or shame. We are the exception to the rules we force upon others. Because we're us. Because our military is both powerful and ruthless.
But, then again, America has always stood for some important bedrock principles: freedom of speech, freedom of (and from) religion, freedom of the press, the right to due process, the right to be secure in our persons, homes and effects. Our notion of freedom was codified more than two centuries ago and thankfully still stands in the face of so many ongoing challenges.
But this freedom is under attack from many fronts. It is attacked domestically, and it is attacked from afar. It is attacked by ignorant herd members, and by highly educated Machiavellian monsters wearing suits. It is attacked by the corruption of the system erected to defend it and by external influences such as oil-money bribes.
By now we've all been exposed to the concept of a "clash of civilizations." By now we should have revisited that hypothesis at least twice. Intractable cultural differences divide humanity today, and I will mention an important one, which some are not going to want to hear.
In the West we reserve the right to reject your religion. We have no obligation to suffer your religious proclamations, and we reject out of hand the very concept of religious law as equivalent and supplanting secular law. We are a secular haven, and we are not under any obligation to grant religious ideas any special place elevated above the cacophony of hucksters, charlatans and pornographers, of which there are multitudes.
This argument becomes quite real when tested. Incident after incident has led to extreme violent backlashes against the exercise of this particular religious freedom. Theo Van Gogh was the first prominent Westerner assassinated for daring to challenge Sharia Law, with a provocative short film called Submission. Do you dare to click and watch it? The film told of a young Muslim woman punished for falling in love. With no freedom of her own, she was a criminal guilty of fornication in a system designed to sell her off like chattel into a prominent family. So much is wrong with this single incident. It certainly cannot be defended by our modern Western standards, not at all.
We will not return to 7th-century theocracy, and the First Amendment is non-negotiable. We will draw the line, and the line provides that we in the West can tell anyone and their stack of holy books to take a long walk off a short pier. That is something we will fight to defend, as forcefully or perhaps more so than the Al Qaedas, ISIS, Al Nusrah Brigades, Al Shams et al. of the world. That is indeed a clash of civilizations.
Many American leftists/liberals/progressives now engage in apologetics over Islamic terrorism, as if it didn't actually exist. Their admonishments approach the absurd when mass killers like Omar Mateen proudly proclaim their allegiance to ISIS as they shoot scores of innocent bystanders. The twisted illogic of progressives lately has jumped the shark.
Yes, religion was a factor. Mateen was a longtime fanboy of Islamic terror and should have been monitored by FBI as the next potential mass killer he turned out to be. The evidence was there ahead of time. He'd made repeated threats to that effect and was investigated for them over a ten-month stretch.
Denying reality is not a legitimate answer. We have not just freedom, but a civic duty, a responsibility to know what's actually going on, why, and how best to address it.
And that, sadly, leads me to my final point today, July 4th, a day of failure more than success. Today's American public is derelict in its civic duty. It is not well informed. It cannot think clearly about heated controversies such as terrorism, war and peace. Education has crumbled, vanquished by the tsunami of propaganda. If we were to choose a new name for our nation it would be most accurately described as Propagandistan. Blathering talking heads shout half-truths, quarter-truths, or perhaps less twenty-four hours a day on hundreds of channels. Such an insane media environment is beyond what anyone could have imagined even a few decades ago. The unsourced noise has drowned out the factually defensible. Ideology has trumped common sense.
How else to explain Donald Trump v. Hillary Clinton?
Drink heavily this July 4th, brothers and sisters. It could very well be the last one.
#
www.joegiambrone.us/
@jogiambrone