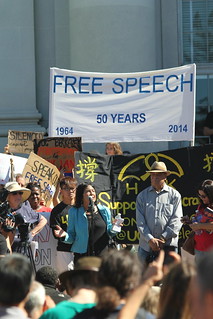 Duluth, Minnesota (OpEdNews) May 4, 2015: Police officers have killed two armed men in Garland, Texas, who had opened fire on a guard at an exhibit deliberately designed by a local anti-Islam group to offend Muslim sensibilities by exhibiting cartoons of the Prophet Muhammad.

But I am in favor of allowing criticism of religion, including cartoons mocking certain aspects of a religion, in the spirit of free speech in the United States, provided that it is non-violent. I do not condone physical violence as a way to express anti-religion criticism. For this reason, I do not condone what the gunmen in Texas are reported to have done in shooting a guard at the exhibit.

Now, for understandable reasons, Pope Francis recently said that free speech should NOT include mocking religions -- as the cartoons of the Prophet Muhammad supposedly did. No doubt Pope Francis would prefer NOT to see the Roman Catholic religion, or certain aspects of it, mocked publicly in cartoons, or otherwise criticized or mocked publicly.

Now, before the Second Vatican Council (1962-1965), the Roman Catholic Church was officially teaching certain things that were debatable, to say the least. But Vatican II officially changed the debatable teachings, thanks in large measure to the American Jesuit theologian John Courtney Murray. For an account of his pivotal role in Vatican II, see Garry Wills' book THE FUTURE OF THE CATHOLIC CHURCH WITH POPE FRANCIS (2015; see the index for page references for Murray).

To keep Blanshard's penetrating critique of certain church teachings at the time in perspective, we should remember that Senator Joseph McCarthy of Wisconsin, a Roman Catholic, was notorious for alleging that certain people in government positions were un-American.

In a similar spirit of suspecting other people's loyalty as Americans, Blanshard was calling the loyalty of American Catholics into question because of certain official church teachings at the time.

Historically, anti-Catholic criticisms have not been unheard of in American culture. For example, certain Protestant preachers routinely characterized the pope as the Anti-Christ and the prostitute of Babylon. Colorful invective, eh? But mocking the pope as the supposed Anti-Christ and prostitute of Babylon did not result in the abolition of the office of the pope in the Roman Catholic Church, or of the Roman Catholic Church.

Despite that long history of anti-Catholic criticisms in American culture, had no criticisms of certain official Roman Catholic teaching been expressed by American Protestants such as Blanshard, it is hard to imagine that Fr. Murray would have been motivated to speak out or that Vatican II would have been motivated to change the relevant church teachings at long last.

All Americans today, not just American Catholics, should be thankful that Vatican II's intervention changed the church's official teaching that Murray and Blanshard, each in his own way, criticized.

But what about anti-Protestant criticisms in American culture? Tom Paine criticized organized Christianity. But American Protestants did not appreciate his criticisms, to say the least. As a result of their push-back, he is not remembered today as a Founding Father, as he deserves to be remembered.

Arguably the most notorious and problematic criticisms of a religion, or aspects of the religion, are certain anti-Jew expressions in the Christian scriptures.

Related Topic(s): Catholic; Christianity; Culture; Freedom Of Speech; Islam; Muhammad; Protest; Protestant; Religion; Speech, Add Tags
Add to My Group(s)
Go To Commenting
The views expressed herein are the sole responsibility of the author and do not necessarily reflect those of this website or its editors.