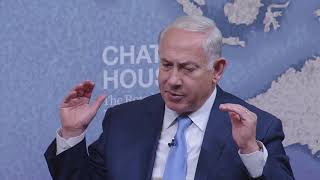 Benjamin Netanyahu's views on the politics and history of the Middle East
(Image by YouTube, Channel: Chatham House)   Details   DMCA

Right-wing Israeli Prime Minister, Benjamin Netanyahu, is escalating his war on the Palestinian people, although for reasons almost entirely related to Israeli politics. He has just given the green light to legislation that would make it easier for Israeli courts to issue death sentences against Palestinians accused of carrying out "terrorist" acts.

Netanyahu's decision was made on November 4, but the wrangling over the issue has been taking place for some time.

The "Death Penalty" bill has been the rallying cry for the Israel Beiteinu party, led by ultra-nationalist Israeli politician and current Defense Minister, Avigdor Lieberman, during its 2015 election campaign.

But when Lieberman attempted to push the bill in the Israeli Knesset (parliament) soon after the forming of the current coalition government in July 2015, the draft was resoundingly defeated by 94 to 6 with Netanyahu himself opposing it.

It has been defeated several times since then. However, the political mood in Israel has shifted in ways that have obliged Netanyahu into conceding to the demands of the even more hawkish politicians within his government.

As Netanyahu's coalition grew bolder and more unhinged, the Israeli Prime Minister joined the chorus. It is time "to wipe the smile off the terrorist's face," he said in July 2017, while visiting the illegal Jewish settlement of Halamish, following the killing of three settlers. At the time, he called for the death penalty in "severe cases."

Ultimately, Netanyahu's position on the issue evolved to become a carbon copy of that of Lieberman. The latter had made the "death penalty" one of his main conditions to join Netanyahu's coalition.

Last January, the Israel Beiteinu's proposed bill passed its preliminary reading in the Knesset. Months later, on November 4, the first reading of the law was approved by Israeli legislators, with the support of Netanyahu himself.

This reality reflects the competing currents in Israeli politics, where the long-reigning Israeli Prime Minister is increasingly embattled, by accusations from within his coalition and outside of being too weak in his handling of the Gaza Resistance.

Coupled with the tightening ring of police investigation about corruption by Netanyahu, his family, and closest aides, the Israeli leader is pounding on Palestinians with every possible opportunity to display his prowess.

Even the likes of former Labor Party leader, Ehud Barak, is attempting to resurrect his failed career as a politician by comparing his past violence against Palestinians with the supposedly weaker Netanyahu.

Netanyahu is "weak," "afraid" and is unable to take decisive steps to rein in Gaza, "therefore he should go home," Barak recently said during an interview with Israeli TV Channel 10.

Comparing his supposed heroism with Netanyahu's "surrender" to Palestinian Resistance, Barack bragged about killing "more than 300 Hamas members (in) three and a half minutes," when he was the country's Defense Minister.

Related Topic(s): Death Penalty; Human Rights Violations; Israel; Killing; Legislation; Palestinian; Racism; Terrorism, Add Tags
Add to My Group(s)
Go To Commenting
The views expressed herein are the sole responsibility of the author and do not necessarily reflect those of this website or its editors.