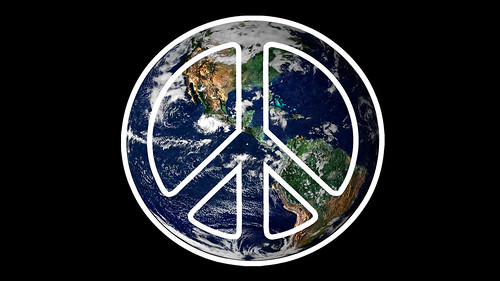 Improving the World with Maximum Democracy

If you do an internet search on "Improving the World," you will find excellent ways that individuals working alone can help improve the world (for example, by being kind or by recycling), but you will probably not find any specific solutions to totally remake our society.

To become a popular political writer, you have to be good at describing problems because writers that focus primarily on solutions are considered to be too idealistic--a waste of the readers' time. Paradoxically we love utopian songs like John Lennon's that "imagine there's no countries," but articles that propose specific solutions to create an ideal democratic society and world peace are not taken seriously. The reason for this is that most people have lost hope and have become so alienated that all they can do is complain, and they love writers who articulate their dissatisfaction. Instead of just being another article that tells how bad things are, this article also focuses on ways that we can unite together to change the system.

Ideally the best way to collectively improve the world in a nutshell is to make sure that no country has an imperialistic foreign policy, and that every country maximizes democracy and helps its people reach their fullest potential. Ultimately we need a world government of, by, and for the people of the world. With enforced international law, war would be illegal.

Many have become discouraged about the possibility of disempowering the CIA, the military-industrial-congressional-complex, and the wealthiest one percent, and as a result they have saturated their lives with movies, restaurants, sports, and electronic gadgets. Furthermore, they do not have a vision of what the ideal democratic society would look like.

In this article, I offer specific procedures to maximize democracy at every level of government that are fair to both rightists and leftists that can set a precedent for the next seven generations. Native Americans taught that every personal and collective decision must consider how it will affect their descendents seven generations into the future. It would be wise to heed their advice.

We must constantly think about the ideal of what we, others, and the world can become. When we do mindfulness meditation, for example, we learn to perceive and accept things exactly the way they are, but when we revert back to our normal thinking process, we can choose to focus on ideal possibilities. If we cannot accurately identify the problems and visualize the ideal, we will not know the best practical and realistic interventions to make.

Our economists are mostly preoccupied with whether the economy is growing, and many individuals are mostly concerned about whether their stock-market portfolio is increasing their profits and wealth. But ecologists have warned that this endless growth and misuse of precious resources is not a good thing from a global perspective because the planet has a carrying capacity. It is not sustainable for more people to have more material things. Voluntary simplicity is needed because we need to "live simply, so that others can simply live."

How many times a day do we think about the fact that half of the world's 7.6 billion people lives on less than $2.50 a day? Does the average American show concern about our 20.24 trillion dollar national debt, which is caused by having annual federal deficits year after year?

According to War Resisters League, 48 percent of our annual federal budget goes toward current and past military spending. According to Dave Lindorff, a columnist for CounterPunch, if you "include Veterans' benefits and health care, the huge secret intelligence budget, the budget for the Energy Department, which is mostly for the huge nuclear stockpile, and of course interest on the debt for the funds borrowed to pay for America's military and its endless wars, [it] adds up to some 1.3 billion a year and rising. That figure represents 54 percent of all discretionary spending in the federal budget." Democrats and Republicans rarely show interest in cutting our military spending. Our CIA and military often intervene in the affairs of any sovereign country that does not cooperate with the American way of doing business, resorting to sabotage, assassinations, or whatever it takes.

Foreign-policy expert William Blum wrote an article in 2013 entitled "Overthrowing Other People's Governments: The Master List," in which he lists over 50 instances of the United States overthrowing, or attempting to overthrow, a foreign government since World War II.

Andre Vltchek has written in his latest bookExposing the Lies of the Empire that "The majority of Europeans and North Americans appear to be thoroughly apathetic toward the state of the world. The difference between what U.S. citizens think their rulers are doing in the world and what their rulers are actually doing is one of the greatest propaganda feats in modern history. While the American Empire constantly brags about 'democracy,' it is running the most totalitarian regime ever known to mankind."

The wealthiest one percent of Americans has control over Congress, which doesn't represent most of us. The top one-tenth of 1 percentowns almost as much wealth as the bottom 90 percent. To stay in office year after year, our lawmakers in our national legislature do the bidding of the super rich because the super rich have the most money to finance their campaigns.

The United States, through its decadent capitalism, neoliberal foreign policy and imperialism bent on controlling the world, and racism from the founding fathers up to the present--is the greatest threat to world peace and the destruction of the planet. Where is the outrage? Where is the righteous anger? Where is the rebellion? What happened to the nonviolent Peace Movement that was so powerful during the Vietnam War? It's nowhere to be found because everything is a lie and we're all living in a Matrix, brainwashed by the dominant culture that spews its life-destroying message through television, schools and churches, and a corrupt government controlled by the CIA. Readers are encouraged to watch (parts 1 & 2) of the documentary "Money, Happiness, and Eternal Life--Greed."

Related Topic(s): Bottom-up; Democracy; Hope Hopefulness; Neighborhood; Policy; Politics; Schools; Spiritual; World Peace, Add Tags
Add to My Group(s)
Go To Commenting
The views expressed herein are the sole responsibility of the author and do not necessarily reflect those of this website or its editors.