Click Here to Remove All Ads
Cross-posted from  The Guardian
Margaret Sullivan and Joe Nocera raise troubling questions about their own paper's incoming president and CEO, Mark Thompson 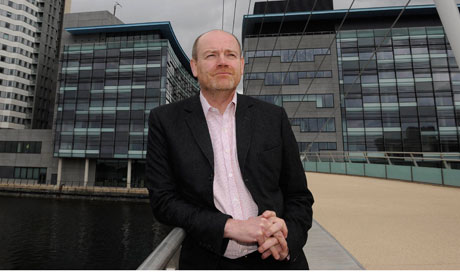 (Image by Unknown Owner)   Details   DMCA
Mark Thompson says he was made aware of the Newsnight investigation into Jimmy Savile, but did not know details. Photograph: Nigel Roddis/Reuters

Over the past month, two New York Times columnists have displayed brave and extraordinary journalistic integrity that deserves commendation. Both instances pertain to the still-growing scandal that BBC senior executives suppressed the media outlet's own investigation into the alleged serial pedophilia of Jimmy Savile, one of Britain's most beloved TV celebrities whose highly popular BBC show was aimed at teenagers.

What makes this story relevant to the New York Times is that the BBC's director general at the time the Savile story was killed, Mark Thompson, was selected last August as the new president and chief executive officer of the New York Times Co. The announcement was made by Arthur Sulzberger Jr., the chairman of the Times Company and the newspaper's publisher.

Since then, serious questions have arisen over what Thompson's role was, if any, in the killing of the Savile story, and whether he has given accurate and credible accounts of his knowledge of that episode. For obvious reasons, the New York Times has more of an interest than any other institution in determining what responsibility its incoming CEO and president bears for these sordid matters.

But, for equally obvious reasons, it is difficult to expect that Times reporters and editors will be dogged in investigating the role played by their new corporate boss. That is particularly true given that Thompson was selected and publicly heralded by the long-time controlling Sulzberger family as the savior of the struggling Times. Any journalistic investigation by the Times into Thompson's behavior would, in essence, be directly adverse to the corporate interests of the company that employs those journalists.

None of those concerns, however, remotely deterred the paper's new intrepid Public Editor, Margaret Sullivan. In a 23 October blog post, she unflinchingly laid out all the facts surrounding the scandal and the questions about Thompson's role, and then argued: "It's worth considering now whether he is the right person for the job, given this turn of events."

Related Topic(s): BBC; Newspapers; Reporters; Scandal; Sulzberger, Add Tags
Add to My Group(s)
Go To Commenting
The views expressed herein are the sole responsibility of the author and do not necessarily reflect those of this website or its editors.