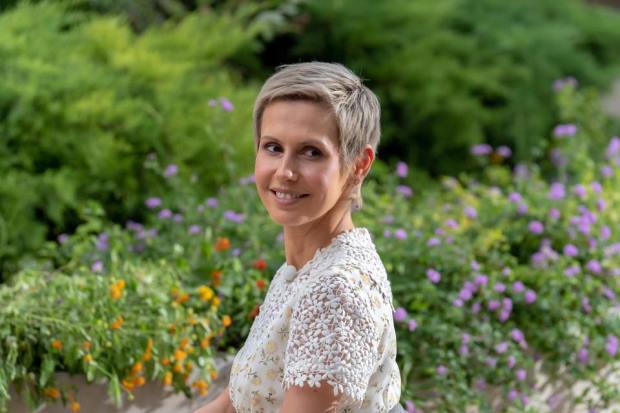 I had been sitting in a small entrance room for what seemed less than a minute when the door opened and Syria's first lady, Her Excellency Asma al-Assad, greeted me with a warm smile, welcoming me inside a slightly larger sitting room. In official meetings I had had over the years in Syria, I was accustomed to a secretary or assistant escorting me into the meeting room. Asma al-Assad, however, does things up close and personal.

Over the years in Syria, I had heard from people I encountered that she and President Assad routinely meet with their fellow Syrians in crowded venues, mixing and engaging with the people. I had also seen countless photos and videos of the Assads visiting Syrians in their homes around the country.

While I have been to Syria over a dozen times in the past seven years, it had never occurred to me to request a meeting with the first lady. But when that opportunity recently presented itself, I leapt at the chance to speak with one of the most beloved figures in Syria, and to hear her thoughts on her country, her fellow Syrians, and on the plights they are all in. And as it turned out, it was a chance to hear her poignant insights on her role as a mother, a citizen, the wife of the President and a leader in her own right.

Even before assuming the role of Syria's first lady, Asma al-Assad made it a priority to focus on the development of Syria, and over the years since she's headed organizations focusing on a range of development issues, including financial, educational and vocational. To effectively work on the many issues she does, her level of awareness of Syrians' situation on the ground is crucial.

She has travelled widely around Syria, to the smallest villages, to meet with those who could benefit from the various organizations she heads. Videos abound of the first lady, and also the president, visiting wounded soldiers, families of martyrs, cancer patients, and impoverished Syrians, greeting them with hugs and kisses to their cheeks. They often sit with them on the floor of their homes, listening to them talk about their experiences.

In fact, in an interview she gave in 2002, Asma al-Assad explained:

"I wanted to meet [ordinary Syrians] before they met me. Before the world met me. I was able to spend the first couple of months wandering around, meeting other Syrian people. It was my crash course. I would just tag along with one of the many programmes being run in the rural areas. Because people had no idea who I was, I was able to see people completely honestly, I was able to see what their problems were on the ground, what people are complaining about, what the issues are. What people's hopes and aspirations are. And seeing it first-hand means you are not seeing it through someone else's eyes. It was really just to see who they are, what they are doing."

As I already had an appreciation for what she's accomplished I approached our recent meeting with a great degree of admiration for the person she is and the compassion she exudes.

Since this meeting was not a formal interview, I did not seek to record the over two hours of conversation with Her Excellency. Immediately after leaving, however, I did jot down as many notes about our conversation as I could recall, and will do my best to do justice to what Asma al-Assad said, sometimes quoting her but in general paraphrasing her words.

Also, while I wish to express the respect she deserves in her role as the first lady, and whereas most would call her Your Excellency, I'm also aware that she isn't fond of titles and fanfare, one of many traits evidencing her humility. Thus, to find middle ground I will either refer to her as the first lady or Asma al-Assad.

Finally, although I've begun this essay with focus on Asma al-Assad and her character, what follows is really about Syria, through her eyes, and at some points my own. From the way she spoke, it is very clear that everything she does for her country is for her country, and she does so with an admirably passionate commitment.

I was admittedly anticipating our meeting, wondering how it might unfold. As it turned out, from the initial greeting, conversation flowed naturally and comfortably, which I attribute not only to Asma al-Assad's ability to put those she meets with at ease very quickly, but also to the genuine interest and attention she pays everyone she meets.

She asked about my family, and was concerned about my own well being-to which my answer was something along the lines of: I'm very gratefully in the place I would most want to be right now. She asked about my experiences in Palestine in general, and my years in Gaza specifically. This was not feigned interest, as the first lady has consistently shown support for Palestine.

Related Topic(s): America; Sanctions; Syria; War On Syria, Add Tags
Add to My Group(s)
Go To Commenting
The views expressed herein are the sole responsibility of the author and do not necessarily reflect those of this website or its editors.