Thomas Ricks' book is the latest offering history's lessons in our dangerous time. 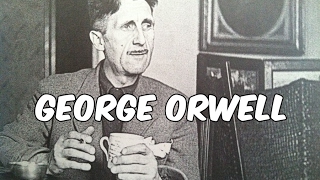 Donald Trump's reactionary presidency and Silicon Valley's spying on online users is pushing the nation and world in dangerous directions comparable to past eras, where authoritarian rule and totalitarian belief held sway. A handful of writers have urged Americans to heed history's lessons on resisting tyranny -- in all of its forms.

One of the most recent is Thomas Ricks, who, for the past two decades has been among the most prominent journalists covering the military and war. His newest book compares and contrasts Winston Churchill and George Orwell, tracing how both came to recognize and resist abuses of power and political propaganda to side with individual dignity.

AlterNet's Steven Rosenfeld interviewed Ricks, who recounted those lessons and their critical relevance today in an era dominated by fake news politics and predatory hi-tech.

Steven Rosenfeld: Your book, Churchill and Orwell: The Fight for Freedom, is remarkable in many ways. You tell how both men shaped the 20th Century and remain more than relevant. You describe how they evolved, held their own against their day's political conformists and ideologues, both left and right; and how they came to understand how authoritarian and totalitarian regimes operate.

The takeaways resonate today, whether we're talking about an executive branch that lies, erases and revises history, or the tech sectors that spies on citizens and sells its files. What prompted these men, and especially Orwell, to reject herd mentalities in private and in public?

Thomas Ricks: Oddly enough, I suspect for Orwell, it began with his love of personal observation. Even a child, he loved observing nature, and that continued throughout his life. If you read his diaries, he had a habit of just writing down what he physically sees around him, what he's thinking about, what he's hearing people talk about -- just basic observation. I think for Orwell, that becomes a part of departure, that human freedom begins with the right to perceive and to trust your own perceptions.

Of course, Orwell as an adult, bangs up against Stalinism, which says, "No, we will tell you what to think. If you're a good member of the Communist Party, you will believe what we tell you to think. We will decide what is right and what is wrong. We will decide what the facts of the matter are." That's where Orwell breaks with Stalinism, but he doesn't break with the left. He remains a socialist all his life.

Steven Rosenfeld: That's what's so interesting about this, at least in more recent modern America. The political right has lionized Orwell, and not the left, which you point out.

Thomas Ricks: That's one thing I was trying to do in this book, was to kind of recover both these guys for liberalism, and even progressivism. Churchill was not always a conservative, and Orwell was always the socialist. Yet both have been claimed by the American right, in ways that I dislike. With this but I was trying to say, Churchill is more complex political figure than he's seen as today, and Orwell should be seen properly as a member of the left throughout his life. Delivering a leftist critique of Western capitalist democratic society, all his life.

Steven Rosenfeld: When you say you want to recover their legacy for liberalism, what you're talking about is they both, and particularly Orwell, rejected political ideologues of their day based on personal experience. They came to understand how authoritarian and totalitarian systems work, and how propaganda works. Can you describe that arc?

Thomas Ricks: Sure. Orwell goes into the 1930s, a pretty typical leftist of his time. He believes leftist good, right is bad. So socialism and communism is good, and capitalism and fascism, bad. Then he goes to Spain late in 1936. There he has the great political education of his life. He is a member of a small political splinter group they're fighting in the Spanish Civil War, Anarchist Trotskyites. They are part of the left, but they are not mainstream left in Spain. Now the problem was at the time, Stalin of Russia could not stand the idea of a competing leader of world communism. With Trotsky having been a comrade of Stalin's, and then fled Russia, what was becoming? So the first enemy of Stalin was non-Stalinists on the left. These are the people he really went after. As the Soviet Union became more and more influential in the Spanish Civil War, one of the things it did was use its security apparatus, the NKVD, the predecessor of the KGB. The NKVD runs the security forces, the police and the secret place of the Spanish Republic, the left-wing government. It goes after the non-Stalinist parts of the left in Spain.

Orwell is up writing on the front against the nationalists-fascists. Then he comes back to Barcelona on leave in May 1937 to see his wife, who was working in Barcelona, and is shocked to find himself getting involved in street fighting with the republican government attacking his own people, his little faction. Then he goes back to the front, fights the fascist and nationalists again, and is shot through the neck. To his amazement, he doesn't die. The bullet misses the artery, the windpipe, and the spine, which is kind of a miraculous thing to have happen. He flees Spain. He doesn't know it at the time. We know actually, he and his wife were both indicted right about the time they left, by the republican government for treason and Trotskyite deviationism.

He flees Spain, goes home to England, and sits down, and reads all the newspapers, and all their coverage of the Spanish Civil War. He reads the right-wing newspaper. He's not surprised they're lying about what's going on. But then he picks up the left-wing newspapers, with all their coverage of the war over the last six months, and he's shocked to find they're lying too. He comes away from Spain, and the experience of seeing friends of his killed by a left-wing government, thinking very differently about leftist politics. He decides that fascism and communism are actually pretty close together. They are different manifestations of the same thing. They are right-wing and left-wing manifestations of totalitarianism. He decides the key to freedom, begins with personal liberty, with the right of the individual to proceed.

Steven Rosenfeld  covers democracy issues for AlterNet. He is a longtime print and broadcast journalist and has reported for National Public Radio, Monitor Radio, Marketplace,  TomPaine.com  and many newspapers. (more...)
Related Topic(s): America Freedom To Fascism; American History; George Orwell; Trump Illegality; Winston Churchill, Add Tags
Add to My Group(s)
Go To Commenting
The views expressed herein are the sole responsibility of the author and do not necessarily reflect those of this website or its editors.