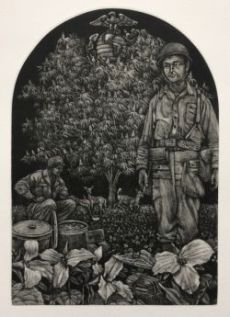 By War and By God
(Image by Akemi Ohira)   Details   DMCA
Like 9/11, what we thought could never happen in America is happening again, but in 2019, administered by a pretend president and his Acting government, conniving with the foreign power determined to destroy our ability to weather Franklin's admonishment, a Republic, if you can keep it.

Streaming Michael Cohen's reboot channeling John Dean's, there's a cancer on the presidency Impeaching for our children, we bequeath them, Mike Pence .

Few American presidents have worn sobriety as the only proof of character, while daily crashing through clearly marked humanitarian Stop Signs, putting pedal to the metal to T-Bone both America's history and potential.

Confident we won't defeat ourselves by surrendering to the foolishness of self-inflicted vengeful violence, nor to denial of the fearfully fatigued, because Peaceful Assembly and voter registration are not weak sisters, but rather, like United We Stand, the bridge that has restored America after Revolution, Civil War, two World Wars, sixties assassinations and September 2001.

Seeing through Corporatism's haze, the wise set aside all Trump induced chaos rattling around in the echo chamber of a Fourth Estate that has lost its way perceiving Media smirks, laugh America to death.

Gun owners know Wayne Lapierre's malleable maniacal marionette-in-chief of misinformation is, like Cheney, Pence and Putin's Moscow Mitch, another bad man with a gun an adversary to truth, apathetic to the human condition - profiteering off the sacred office he has careened off course.

So, answering 2020's call, the rational rise to eject Trump Senate enablers not with Tiki-torches, but with reasserted government of, by and for the people. Having learned from Odessa grandmother Shauna Saxton, who faced the hateful rage of a mass murderer, but unlike her president and our Congress, took immediate action, saving her family from NRA sponsored mass hysteria we unite!

Witnessing the difference between investigative reporting and the laziness of talking heads repeating, a liar is a liar, like time, we move on.

Recognizing the characteristic opposites of the spineless intimidating NOAA cowardice, we emulate the heroism and integrity of NWS.

Voters get it: while a president may not be dumb enough to share classified information with foreign enemies, a pretend president could be treasonous enough to do so.

Visionaries refuse: to join a pretend president's race with Climate Change, at the expense of, Homeland Security.

Now, We the People embrace national choices and individual responsibilities: for a presidential riddle wrapped in an Acting government mystery, inside the enigma of his resort tweaked Military Industrial Complex refusing to permit the undoing of his oath of office, by foreign policy for financial gain.

Rejecting public and private leaders, who profit from the oppression of a child's future whether female, people of color, LGBTQ or refugees, we ascend.