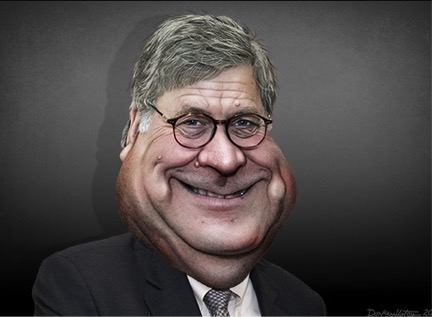 United States Attorney General William Barr is acting as though he has a choice about releasing the Mueller report. He doesn't. Unless Barr wants to live in infamy as a disgraced enabler of the mad and corrupt president, He needs to fulfill his constitutional duty and release the report in its entirety. If he fails to do so, he should be impeached.

In the Department of Justice Order that initiated the investigation, Deputy Attorney General Rod Rosenstein stated that the purpose of special counsel investigation was to "ensure a full and thorough investigation of the Russian government's efforts to interfere in the 2016 election."

The question of Russian interference in the 2016 election affects all citizens. This scope amplifies the meaning of Part 600 - General Powers of the Special Counsel, Code of Federal Regulations. The Special Counsel must deliver a confidential report to the U.S. Attorney General. At that point, "The Attorney General may determine that public release of these reports would be in the public interest, to the extent that release would comply with applicable legal restrictions" 600.9 - Notification and reports by the Attorney General.

It couldn't be more obvious. The integrity of our democratic republic is the critical subject of inquiry and, given the overriding importance of that subject, the public interest must be served.

Why would we think Bill Barr would withhold the report "

" because he told us so in his confirmation hearing.

Barr tried to come off as calm and thoughtful when answering questions. Despite his demeanor, he offered everything we need to know about his intentions. He accepted the notion that a sitting president cannot be indicted in a criminal case. There is no such restriction on presidential indictments in the Constitution. That doesn't bother Barr. He bases his opinion on a 1973 Nixon Department of Justice memo that somehow rationalized this position. Barr also informed us that if confirmed, he would not report on anything other than indictments.

"Here is the Catch-22. Barr won't authorize an indictment of the president, but he is opposed to commenting on investigations absent indictments." Spectator USA 01/16/2019

Without hesitation or a scintilla of embarrassment, Barr gave the public a clear message I decide what gets released and unless there's an indictment, nothing gets published. He left out the need for full transparency based on the defined mission of the Special Counsels effort: "to ensure a full and thorough investigation of the Russian government's efforts to interfere in the 2016 election" and "determine" the obvious that "the release of these reports would be in the public interest."

Cabinet members may be impeached on the same grounds as the president and vice president. The three broad categories of impeachable offenses are: "(1) improperly exceeding or abusing the powers of the office; (2) behavior incompatible with the function and purpose of the office; and (3) misusing the office for an improper purpose or personal gain" Congressional Research Service 10/29/2015.

The House of Representative brings charges in the form of articles of impeachment. The House debates and votes on the articles. If a simple majority of representatives vote for impeachment, the articles go to the Senate for trial. The executive branch official (e.g., Attorney General) is immediately removed from office if two-thirds of Senators casting votes favor the resolution,

The only cabinet member to ever be impeached was the Grant administration's war secretary William Belknap. The House of Representatives passed the impeachment articles unanimously, but the Senate failed to reach a majority for conviction.

Barr's handling of the report today, 3/24, shows precisely why the prospect of impeachment must move to the front of the line. The letter he summary of findings he sent to Congress said nothing about the task of the investigation, the role of Russia in the 2016 presidential election.

Related Topic(s): Attorney General William Barr; Dept Of Justice DoJ; Impeach; Mueller Investigation; Rod Rosenstein; Trump Russia Connection, Add Tags
Add to My Group(s)
Go To Commenting
The views expressed herein are the sole responsibility of the author and do not necessarily reflect those of this website or its editors.