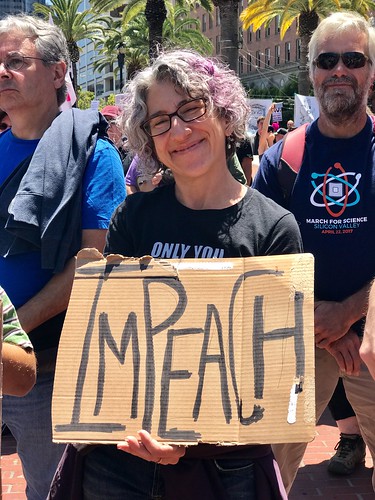 Trump shouting out to reporters and to adoring MAGA-hatters that he's been exonerated by Mueller is like the fabled emperor, in all his nakedness, yelling to his people that the stories about his clothes were all fake news. We know from the sworn testimony of several former Trump associates and from Trump's own public statements that he repeatedly tried to interfere with the Mueller investigation and influence potential witnesses.

Attempted obstruction of justice is a felony. The Mueller report has established that Trump committed multiple felonies. Yet, when asked about impeachment, all that House Judiciary Committee Chairman Jerrold Nadler (D-N.Y.) could say was: "Obstruction of justice, if proven, would be impeachable.... We're going to see where the facts lead us." Mr. Nadler, you have the facts. But they can't "lead" you where you're unwilling to go.

Speaker Pelosi just released a letter to her fellow Democrats (April 22 ) urging caution on impeachment: "We must show the American people we are proceeding free from passion or prejudice, strictly on the presentation of fact." Madam Speaker, now that you have the facts, it's time for a passionate condemnation of Trump.

Every day that goes by with a deranged and criminal president is a threat to the nation. Impeachment was created by the framers of the constitution as an alternative to a coup d'e'tat when the head of state has become a danger to the republic. Are we just going to lie low and hope that his staff and our military leaders will disobey or even forcibly restrain Trump the next time he orders people to do illegal or dangerous things?

The American presidential system magnifies the harm and embarrassment of having as chief executive or head of government someone like Trump. In a parliamentary system such as in Britain or Canada, the chief executive (prime minister) is the head of the ruling party in the legislature. The Queen is the head of state, the person who represents the nation to the rest of the world and to itself in solemn ritual occasions.

In a parliamentary system, the sanctity or reverence citizens attach to the nation as an entity is embodied in the Queen. But her role is mostly symbolic and politically neutral. By contrast, in our presidential system the chief executive (the president) is also the head of state. He or she has the difficult task of acting out both roles.

The main qualities required for a head of state are judgment, dignity and the ability to say appropriate things on public occasions, attributes in which Queen Elizabeth excels. Presidents Eisenhower, Bush Sr., FDR and Obama had these qualities to a high degree. Trump is totally lacking. He is a loud mouth, an ignoramus and a bully. He insults where he should show respect in dealing with officials of allied nations even as he makes nice with violent authoritarians such as Saudi Arabia's crown prince and Egypt's el Sisi. His behavior as head of state and representative of the nation is a further reason for impeachment in addition to his criminal acts as chief executive.

In contrast to removing a president in our system, it's simpler and less traumatic for a chief executive to be removed in a parliamentary system. It can be done through a vote of no confidence by the House of Commons, of which the prime minister is a member. Or the prime minister's own party can remove him or her by an internal vote. Both are possibilities for Britain's Theresa May. An American impeachment proceeding is much more of a crisis. It can seem that a political party or the House of Representatives is attacking a separate but equal branch of government as well as the person who symbolizes the nation.

If, as the House leadership keeps saying, we need more facts and detail than what the redacted Mueller report gives us, we can get it from witness testimony at an impeachment hearing. Holding further committee hearings (often delayed by court battles over subpoenaed documents or persons) will be just as time-consuming as proceeding with impeachment. Trump's loud and incessant messaging will attempt to overwhelm and trivialize future committee findings. The Mueller report will become just one more PR problem flicked off by Trump.

The report presents a disturbing picture of Trump's disrespect for law and due process. It's a narrative supported by nearly two years of investigation by a team of law-enforcement professionals headed by a Republican who was FBI director from 2001-2013. On April 10 Trump felt free to say publicly that the investigators were "dirty cops" and "bad people." He called the investigation "an attempted coup" and a "scam." How far will this degree of contempt take Trump unless he is stopped?

If Congress doesn't impeach (and convict), it will create a further precedent for the increasing disregard of the rule of law by American presidents. President Obama refused to bring criminal charges against a number of high-level banking executives whose massive fraud nearly collapsed the world economy in 2007-8. As a result, it is now accepted practice to fine megabanks large sums for criminal violations, which the banks accept as a cost of doing business.

George W. Bush created a regime of torture in violation of American and international law. Obama refused to prosecute those who had engaged in the torture. This created a precedent for torture as an accepted behavior by the executive branch. As a result, Congress approved Trump's appointment of Gina Haspel as head of the CIA. In 2002 Haspel, known to CIA colleagues as "Bloody Gina," was in charge of a CIA base in Thailand where Abd al-Rahim al-Nashiri was brutally and repeatedly tortured.

The Mueller report is a watershed event. We can expect nothing as authoritative from any future House committee. If Congress is going to defend the rule of law from further erosion, it must do so now. It's their duty to impeach. Now.

Related Topic(s): IMPEACHMENT OFF THE TABLE PELOSI; Impeach; Impeach Trump; Impeachment; Trump Attacks Media; Trump Bully In Chief; Trump Crime; Trump Diplomacy; Trump Impeachment; Trump Lack Of Dignity; (more...) Trump Presidency, Add Tags  (less...)
Add to My Group(s)
Go To Commenting
The views expressed herein are the sole responsibility of the author and do not necessarily reflect those of this website or its editors.