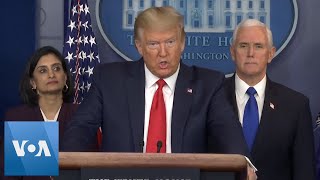 So where are "things" headed some two weeks or so after the coronavirus was taken seriously in the US?

Well here's a quick thumbnail sketch of a few significant happenings as of Friday March 20 as this is being written:

Trump under the "Defense Production Act" is compelling companies (none named) to produce masks and test kits to counter the coronavirus.

The Senate is debating a $trillion dollar proposal to directly help people with up to a $1200 payment to individuals. Majority Leader Mitch McConnell wants it on Trumps desk by Monday. It also includes "assistance" to businesses large and small as well as tax cuts.

New York Governor Andrew Cuomo has announced except for essential businesses-food stores, pharmacies, utilities, banks, public transit-gatherings of any size are banned. New York has confirmed 7102 cases of the virus with 40 deaths.

In China where it all began there's been no new reported cases of the virus. That's the good news. Meanwhile Italy is in virtual lockdown with a surge of 627 deaths in the last 24 hours and total fatalities at 4032.

The stock market continued to tumble with the DOW having lost almost a third of its value ($trillions lost) since its all time high of 29,569in late February. Trading this afternoon was in the 19,460 range.

This appeared two days ago on Zero Hedge. People in Los Angeles were standing in line to buy guns. I mentioned this to an acquaintance who said she witnessed the same thing where she lived in a rural area of Maryland.

Retired. The author of "DECEIT AND EXCESS IN AMERICA, HOW THE MONEYED INTERESTS HAVE STOLEN AMERICA AND HOW WE CAN GET IT BACK", Authorhouse, 2009
Related Topic(s): Corona Virus Coronavirus Covid-19; Debt; Economy; Fracking; Government; Oil; Recession; Trump, Add Tags
Add to My Group(s)
Go To Commenting
The views expressed herein are the sole responsibility of the author and do not necessarily reflect those of this website or its editors.