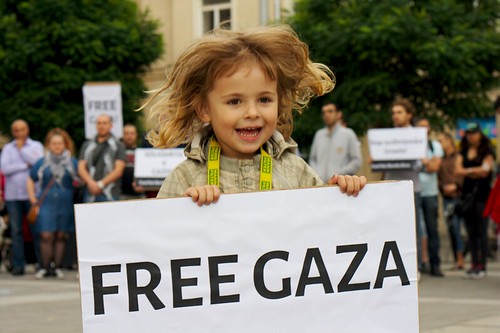 The murderous founding of the state of Israel at the cost of Arab and Jewish lives was brought about by the torching of Palestine into permanent civil war precipitated by an illegal and sham incendiary partition resolution forced through a incomplete incipient UN by American pressure and threats.[1] The resolution embodying a preposterous UN plan of dividing Palestine into seven isolated pieces (as shown on the map provided)

was adopted in full expectation of civil war. The British Empire colonization of Palestine for the Empire's own benefit is Palestine's ugly pre-history.

The UN genocide provoking partition plan, which never by any stretch of imagination could have ever been expected or intended to be implemented, was nefariously forced through the UN General Assembly. During the debate of two UN plans for Palestine, one for independence the second for partition, the Egyptian delegate noted an aim "to establish military bases for the benefit of Powers that wanted to gain a strong hold in the Middle East."

The General Assembly of the United Nations resolves to request the International Court of Justice to give an advisory opinion under Article 96 of the Charter and Chapter IV of the Statute of the Court on the following questions:

(i) Whether the indigenous population of Palestine has not an inherent right to Palestine and to determine its future constitution and government.

(viii) Whether the United Nations, or any of its Member States, is competent to enforce or recommend the enforcement of any proposal concerning the Constitution and future Government of Palestine, in particular, any plan of partition which is contrary to the wishes, or adopted without the consent of, the inhabitants of Palestine.

The eighth question of the proposal to be referred to the Court was rejected by a vote of twenty in favour, twenty-one against, with thirteen abstentions. By one vote was rejected "Whether the United Nations, or any of its Member States, is competent to enforce or recommend the enforcement of any proposal concerning the Constitution and future Government of Palestine, in particular, any plan of partition which is contrary to the wishes, or adopted without the consent of, the inhabitants of Palestine."

What could have been a Jewish and Arab vibrant and dynamic mixed society in Palestine was described by Albert Einstein a year earlier.

"A government in Palestine under the UN's direct control and a constitution assuring Jews' and Arab' security against being outvoted by each other would solve the Jewish-Arab difficulties."

If the alternate UN plan for an independent and democratic Palestine would have not been suffocated by American led colonial power politicking, Jews would have had the access to the entire Mandate of Palestine. In this kind of imagined format, how easy it might have been for virtuoso violinist Yehudi Menuhin's "only possible solution" to have developed, namely, the kind of federated republic that is French-German Switzerland (its Italian part could have been imagined as comparable to autonomous areas for the Druze and Bedouin population).[2]

Related Topic(s): Colonialism; Crimes Against Humanity; Genocide; Media Complicity; Media Malpractice; Media Mass Murderers Accomplices; Palestine_and_Israel; Western Media, Add Tags
Add to My Group(s)
Go To Commenting
The views expressed herein are the sole responsibility of the author and do not necessarily reflect those of this website or its editors.