This moral context, along with the inexorable mathematics of social and economic justice, makes the Omar/Sanders bill an important and profound proposal that deserves broad support 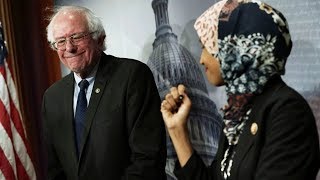 Sen. Bernie Sanders, together with Representatives Ilhan Omar and Pramila Jayapal, has introduced a dramatic reform package on college affordability. It goes far beyond anything proposed so far, both in its scope and in its potential to reshape the way Americans think about their society and government.

One bill in the package, Rep. Omar's Student Debt Cancellation Act, would cancel all outstanding student debt. That's a $1.6 trillion burden affecting more than 45 million people. This bill will benefit people in all demographic groups, communities, and walks of life. That fact is illustrated by the fact that, as Sen. Sanders introduces the bill in the Senate, eight representatives of color (including Rep. Omar) will simultaneously introduce it in the House.

The reform package also includes Sen. Sanders' College for All Act, which provides tuition-free higher education to every qualified American without any additional work requirements, restrictions, or tests for family financial eligibility.

Both ideas are transformative. But, of the two proposals, it is student debt cancellation that's likely to trigger the most vigorous debate. That's a good thing, because it can lead to both a teaching moment and an opportunity for reflection.

Sen. Elizabeth Warren's proposal for partial student debt cancellation began a productive national conversation. But the Omar/Sanders proposal, with its full and universal cancellation for tens of millions of people trapped by student debt, gives us an opportunity: to re-examine our social contract, our awareness of the public good, and our fundamental ideas about equity and fairness.

Some people's first response to the idea of canceling all student debt is to think that it's a step too far. Why not just cancel part of the debt, for some of the debt holders, as Sen. Warren's proposal does? Freedom to Prosper, an activist group that was instrumental in laying the groundwork for full debt cancellation*, offers useful data and analysis on the benefits of full cancellation on its website.

But the most important argument for full cancellation is a moral one. Low-cost or tuition-free higher education was available for many years in the United States, in many parts of the country. A series of public policy choices shifted this cost onto individual students, who were promised that their "investment" would pay off in higher earnings.

Neither the policy change nor the promise was fair to students or their families. It was wrong to shift society's shared responsibility of educating its citizens onto individuals. And it was wrong to make them a promise that, as we now know, never came true. As Julie Margetta Morgan and Marshall Steinbaum wrote for the Roosevelt Institute, "More education has not led to higher earnings over time."

A Plan for Everyone

President Obama put it well in his final State of the Union address when he said, "No hardworking student should be stuck in the red." Partial cancellation would leave millions trapped in the red for the foreseeable future.

Some people have expressed concern that full cancellation could reward wealthier -- and whiter -- people, who are less in need than others. But full cancellation will reduce the racial wealth gap. Economist Marshall Steinbaum concluded that the elimination of all student debt would reduce that gap in younger households from a 12:1 advantage for whites to 5:1a ratio that is still unconscionably and immorally high, and must be addressed by other policies. But this figure shows that full cancellation lessens the harm. When taken as a whole, this college affordability reform package is likely to significantly improve racial injustice in our economy.

In that case, why not target the program to lower-income people, as Warren's plan would? First, because truly wealthy people don't generally have student debt. They write checks for college tuition. If they become wealthy after graduation, their financial advisers will almost certainly tell them to pay off student debt in full. After all, student debt terms are far less favorable than those available to "high net worth individuals."

Related Topic(s): Bernie Sanders; Cancellation; Debt; Education; Ilhan Omar; Jobs; Student Debt, Add Tags
Add to My Group(s)
Go To Commenting
The views expressed herein are the sole responsibility of the author and do not necessarily reflect those of this website or its editors.