Mark LeVine first met Ahed Tamimi, the Palestinian teen activist now in an Israeli prison, five years ago when he was visiting her country. LeVine is professor of history at UC Irvine and is Tikkun's longest serving Inner Editorial Board member. He recounts the experience in an arresting OpEd, "Ahed Tamimi: The Mandela of Palestine?" published on Jan 5, 2018, a portion of which is excerpted here:

The first time I met Ahed Tamimi ... she was around 11 years old. She wasn't yet famous (or infamous, depending on your point of view); it was before the video of her threatening an Israeli soldier with her tiny fists, fearless and filled with fury, hit the internet. But it was already clear what she would become: a fighter. She was a hero-in-the-making; a star at the early stages of going nova. Not quite exploding yet but only a matter of time and nothing could stop her. Not her parents, not the rest of her family, not the Israelis unless they killed her. 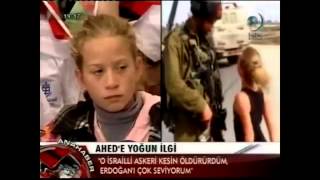 LeVine had come to Nabi Seleh, Ahed's village, to observe the weekly demonstrations against the Occupation:

Nabi Saleh is a small and picturesque village in the central West Bank overlooking a valley with an important spring" most of the West Bank is so stunningly beautiful it could compete with Switzerland for both the vistas and the food.

...Instead of being a tourist center, Nabi Saleh is a resistance center, one of the most important places on the planet, the site of the real Armageddon (Megiddo) for humanity's soul. No, I'm not exaggerating. In a powerful column written after Ahed's arrest Lisa Goldman writesthat Nabi Saleh is where she "lost her Zionism." It's impossible not to lose your Zionism when you've experienced Nabi Saleh. The evil and brutality of the Occupation burn through whatever fantasy of a mythical liberal Zionist dream with which you might have arrived.

LeVine shares the details of the weekly resistance event:

...every Friday dozens of people gather at the center of the village, pick up their hand made signs, begin their chants, and march one and all--old and young, Palestinians and (Diaspora and even Israeli) Jews, locals and "internationals" -- to the patch of hill between the top of the village and the valley road and spring below, which is coveted by the nearby settlement of Halamish (in fact, (last) October, the Israeli government issued orders seizing yet more land from the village to expand the settlement).

But when the marchers approach the top of the hill, the hill itself, which is usually still empty, suddenly fills with Israeli soldiers at the bottom along the road that leads to a nearby military encampment.

And then the performance begins. The soldiers tell the protesters to go back; they refuse. They threaten to fire teargas; the people march forward. Either the tear gas starts or some of the kids start to throw stones (they rarely get close to the heavily armed and fully protected soldiers) but within a few seconds the 'production' is in full swing. I say 'production' because Nabi Saleh is nothing if not theatre; take your pick: theatre of the oppressed, of the absurd--a "dialectical" or "episches Theater" of the type developed by 20th century luminaries like Piscator and Brecht who desperately wanted to create a political theater that could better represent the intense ferment of inter-war Europe, particularly from below.

If it's a good day, no one gets too badly hurt.

The people protest, kids throw stones and taunt the soldiers well over 100 meters away. The soldiers, if they're not in a bad mood, don't unload dozens of canisters at a time, and sometimes people make it to the bottom of the hill, where they sit and chant a few feet from the road while the internationals and the Tamimi family takes video and pictures. A few will try to cross the road to reach their spring, which rarely happens as the soldiers inevitably grab them and push them back. When someone does get through, it's like scoring the winning touchdown at the Super Bowl.

At some point Ahed or one of the older kids gets up and walks over to the Israeli in charge and uncorks a monologue against the Occupation and his presence on her land that is every bit as eloquent as any Martin Luther King, Jr. unleashed against Jim Crow.

Related Topic(s): #freeahed; #freeahedtamini; Ahed Tamimi; Palestine; Palestine_and_Israel; Rosa Parks; Rosa_parks; Zionism, Add Tags
Add to My Group(s)
Go To Commenting
The views expressed herein are the sole responsibility of the author and do not necessarily reflect those of this website or its editors.