The day the late Supreme Court Justice Antonin Scalia died Appeals Court Judge and Scalia's nominated replacement, Neil Gorsuch, said he could barely get down a ski run in Colorado because he was so blinded by tears at his death. This was not a private utterance or personal feeling of deep emotion that he shared with friends and family. He told of his profound sorrow in a speech in April 2016 at Case Western University. Gorsuch wanted the world to know that Scalia was more than just a heartfelt friend. He was a man and a judge whose legal and judicial he was in total lockstep with. 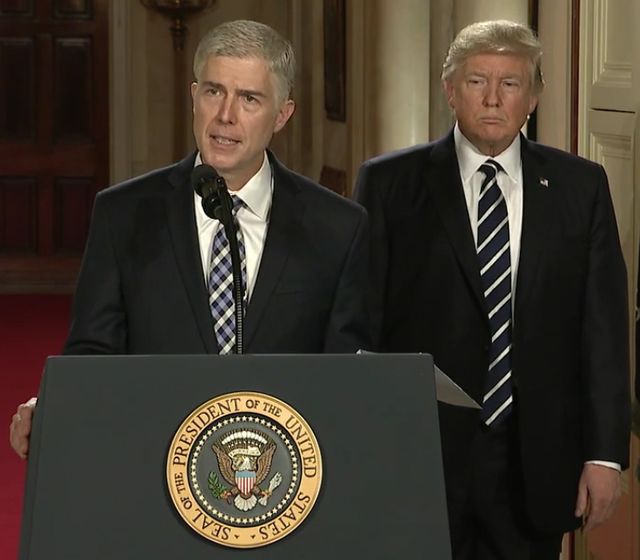 Scalia represented judicially everything that liberal Democrats, civil rights, civil liberties, women rights, and public interest groups regard as wrong with the Supreme Court. His opinions and votes on crucial cases read like a what's what of legal horror stories. Scalia tipped the White House to Bush in Bush versus Gore in 2000, voted to gut Voting rights, oppose same sex marriage and gay rights protections, to scrap the checks on corporate spending on elections, whittle away at abortion rights, and give free rein to corporations to discriminate by narrowing down who could file class action lawsuits.

The only reason that Gorsuch hasn't matched his mentor and idol, Scalia's, 19th Century grounded voting record on key cases, is because he hasn't been on the court for the decades as Scalia was on the high court. But there's enough in his thin resume on some cases that pertain to abortion rights, planned parenthood funding, a powerhouse federal judiciary, and most menacingly the strictest of strict reading of the constitutionalism, branded "originalism," to serve as fair warning of what's to come if he gets on the SCOTUS. And, as with Scalia, it won't be pretty.

This is one of the few times that Senate Democrats can do exactly what Senate Republicans did with Obama's pick to replace Scalia, Merrick Garland, use the filibuster to say no. The GOP concocted the blatant lie to justify their obstructionism that Obama was a lame duck president, and lame duck presidents don't and shouldn't have the right to put someone of the high court on their way out. They pooh-poohed the fact that the Senate has approved other lame duck president's picks to the courts including Reagan's pick of Anthony Kennedy in 1988, Reagan's last year in office.

They blocked Garland not because of protocol, propriety, or tradition, but raw, naked and brutal partisan politics. The GOP understands that the Supreme Court is not just a neutral arbiter to settle legal disputes. It is a lethal weapon to skirt congressional gridlock and serve a dual role as a judicial and legislative body. This meant scrapping the long-standing tradition on the court where justices based their legal decisions solely on the merit of the law, constitutional principles and the public good, and not ideology. Trump and his hard-right conservative backers are fully aware that the court's power to be de facto legislators could last for decades. After all presidents and congresspersons come and go, but justices can sit there until death if they choose. Scalia was proof of that. He sat for 30 plus years on the bench.

Gorsuch is young, fit, and conceivably could duplicate Scalia's tenure on the high court. He would sit there long after Trump is gone, and long after other future Democratic presidents that sit in the Oval Office depart. During those years, he will be a key vote, if not the key vote, on many cases involving labor protections, civil rights, civil liberties, gay and abortion rights, corporate power, environmental issues, education, the death penalty, criminal justice system reforms, voting rights, and many other issues that will alter, and shape law and public policy for years, perhaps decades to come.

Gorsuch was carefully vetted by the Heritage Foundation when it submitted its list to Trump of reliable ultra-conservative judges who would rigidly toe the ultra-conservative line. They took no chance of recommending any judge who might in any way be a high court turncoat, and experience a judicial conversion in philosophy as a few judges thought reliably conservative have done in the past. The stakes are simply to high to risk that in the relentless drive by ultra-conservatives to roll back the gains in civil, women's and labor rights of the past half century.

The pressure will be enormous on conservative Democratic senators in the Red states to cave quickly and support Gorsuch, by rejecting a filibuster. They'll be hit with everything from the stock argument that presidents have the right to pick their SCOTUS justices to outright threats that they'll be top targets when election time rolls around. It will take much for them to do what the GOP did with Garland, that's to say no, and back a filibuster. If they cave, they'll be terribly sorry.

Earl Ofari Hutchinson is an author and political analyst. He is the author of In Scalia's Shadow: The Trump Supreme Court ( Amazon Kindle). He is an associate editor of New America Media. He is a weekly co-host of the Al Sharpton Show on Radio One. He is the host of the weekly Hutchinson Report on KPFK 90.7 FM Los Angeles and the Pacifica Network.

Earl Ofari Hutchinson is a nationally acclaimed author and political analyst. He has authored ten books; his articles are published in newspapers and magazines nationally in the United States. Three of his books have been published in other (more...)
Related Topic(s): Democrats; Donald Trump; Filibuster; Judge Neil Gorsuch; Justice Antonin Scalia; Supreme Court Justice Antonin Scalia; Supreme Court SCOTUS; Supreme Court SCOTUS, Add Tags
Add to My Group(s)
Go To Commenting
The views expressed herein are the sole responsibility of the author and do not necessarily reflect those of this website or its editors.