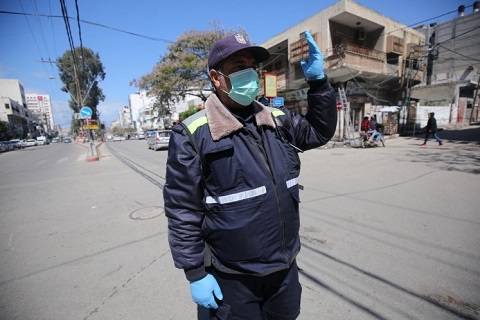 The Palestinians of Gaza know all about lockdowns. For the past 13 years, some two million of them have endured a closure by Israel more extreme than anything experienced by almost any other society including even now, as the world hunkers down to try to contain the Covid-19 pandemic.

Israel has been carrying out an unprecedented experiment in Gaza, using the latest military hardware and surveillance technology to blockade this tiny coastal enclave by land, air and sea.

Nothing moves in or out without Israel's say-so until three weeks ago, when the virus smuggled itself into Gaza inside two Palestinians returning from Pakistan. It is known to have spread to more than a dozen people so far, though doctors have no idea of the true extent. Testing equipment ran out days ago.

Unless Gaza enjoys a miraculous escape, an epidemic is only a matter of time. The consequences hardly bear contemplating.

Countries around the world are wondering what to do with their prison populations, aware that, once it takes hold, Covid-19 is certain to spread rapidly in crowded, enclosed spaces, leaving havoc in its wake.

Gaza is often compared to an open-air prison. But even this analogy is not quite right. This is a prison that the United Nations has warned is on the brink of being "uninhabitable".

In the prison of Gaza, many inmates are undernourished, and physically and emotionally scarred by a decade of military assaults. They lack essentials such as clean water and electricity after repeated Israeli attacks on basic infrastructure. And the 13-year blockade means there is only rudimentary medical care if they get sick.

Social distancing is impossible in one of the most crowded places on earth. In Jabaliya, one of eight refugee camps in the enclave, there are 115,000 people packed together in little more than a square kilometre. Comparable population density nearby in Israel is typically measured in the hundreds.

There are few clinics and hospitals to cope. According to human rights groups, Gaza has approximately 60 ventilators most of them already in use. Israel has 15 times as many ventilators per head of population.

There is little in the way of protective gear. And medicines are already in short supply or unavailable, even before the virus hits. Gaza's infant mortality an important measure of medical and social conditions is more than seven times higher than Israel's. Life expectancy is 10 years lower.

Unlike a normal prison, Gaza's warden Israel denies responsibility for the inmates' welfare. Since it carried out a so-called "disengagement" 15 years ago, dismantling illegal settlements there, Israel has argued against all evidence that it is no longer the occupying power.

That should have been proved an obvious lie when Palestinians, choking on their isolation and deprivation, began rallying in protest two years ago at the perimeter fence that acts as a cage locking them in. Demonstrators were greeted with live fire from Israeli snipers.

Around 200 people were killed, and many thousands left with horrific injuries, mostly to their legs. Medical services are still overwhelmed by the need for long-term surgery, amputations and rehabilitation for the disabled protesters.

What is already a crisis barely needs a nudge from the coronavirus to be tipped into a health disaster.