The country is in an economic emergency. Unemployment -- especially long-term unemployment -- is at extremely high levels and the recovery is faltering. Conservatives are obstructing efforts to solve this because they believe it helps them in the November election. To this end, conservatives are throwing out every possible argument against helping the economy to see if any of them stick, and to provide cover for opposing taking any action that might help matters.

The latest nonsense they are spreading is that helping the unemployed keeps them from finding jobs. Good Lord! This is basically the old "if you feed them they just breed" storyline. They say "it makes them dependent" as if hard-working people laid off because of Wall Street's scams are squirrels. Or, to hear the nasty way conservatives talk about these human beings, they are like rats. "Hobos," one Congressman called the unemployed! And the DC elite listen, chuckle and repeat.

But while they say unemployment assistance keeps these lazy parasites from finding jobs, they also obstruct bills that create jobs by maintaining and modernizing our infrastructure. This tells you it's just something they say, to cover for what they do. And what they do is obstruct any effort to fix the problem because they believe they will benefit if it is not fixed.

For example, the big DC drumbeat right now is against "spending." They claim that government spending caused the crisis, ignoring and passing the buck on everything that actually caused it, especially their deregulation and their lack of oversight. They blame government for everything, so why should this be different.

Along these lines they claim that the stimulus didn't work, or even that spending made the problem worse, because there are still people out of work. But look at the following chart. The right side of the chart shows the effect of the stimulus. (Source, Jed Lewison and Karina Newton) 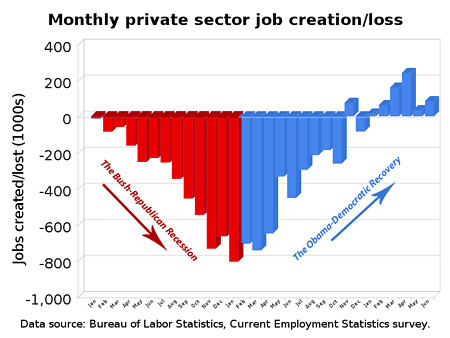 A conservative, anti-government myth that is everywhere now is that "Government forced banks to give loans to people who couldn't pay them back, and this caused the financial collapse" -- and its variant that it was about forcing banks to "help minorities."

This is an example of the tactic of repeating a lie over and over until enough people believe it. To deflect people from understanding what really caused the crisis and from seeing that they are obstructing the effort to reform the financial system they made this one up.

Unfortunately this has become what bloggers call a "zombie lie" -- no matter how many times you prove it is just a lie, it comes back from the dead.

The "zombie lie" problem shows that it is a mistake to think that just arguing facts is a way to shoot this stuff down. Spending your time arguing facts with people who are trying to mislead misses the point. The lie is not about the facts, it is cover for the obstruction. When you try to argue a fact they will make up something else to throw you off track. Facts are not what this is about, feeding a narrative of no action is what this is about, because they understand that a bad economy helps them in the Fall.

Listening to this stuff at all, and trying to argue facts just contributes to the lack of action. There comes a point when you have to stop llstening and getting bogged down by intentional distractions and get something done for the economy and the public.

It Is Time to Stop Listening to This Stuff and ACT

Enough with these stupid, heartless, dehumanizing right wing "if you feed them they breed" arguments that are preventing action. People are out of work and the recovery is faltering. It is time to push aside the naysayers, and get something done. The government simply has to step in and act. First, do the minimal, obvious things:

2) Continue COBRA subsidies, because so many of the long-term unemployed are older people who cannot get or afford insurance any other way. This is simple humanity, people! And, by the way, COBRA itself is running out for many people, never mind subsidies.

Related Topic(s): Anti-government; Conservative Republican; Crisis; Recovery, Add Tags
Add to My Group(s)
Go To Commenting
The views expressed herein are the sole responsibility of the author and do not necessarily reflect those of this website or its editors.