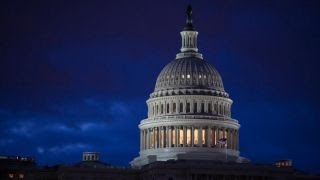 Senate Democrats should stand up for what is right, stare down President Trump and his GOP allies in Washington, and demand that the recently proposed bipartisan compromise to save the DREAM Act be included in the pending spending bill that would prevent a government shutdown.

If Senate Democrats stand tall, stand proud, stand together and stare down Trump with resolve in support of the Dream Act at this time, at this place, during this spending crisis, they will win. They will either win because Republican leaders will accept the bipartisan compromise now, or they will win because Trump and Republicans who control the White House and Congress will be roundly blamed for the shutdown and will then agree to save the DREAM Act.

Dreamers have overwhelming majority support from the American people. Last September, PolitiFact found that House Minority Leader Nancy Pelosi (D-Calif.) was correct when she said that three-quarters of the American people support the DREAM Act. Since then, if anything, support for Dreamers has increased, and in some polls has risen to nearly 90 percent of the nation.

The answer to these questions, for any party not intent on committing political suicide, is no, they do not want to force a government shutdown over an issue that a huge and stunning majority of Americans favor.

If Senate Democrats go to the mattress over this issue, and if Trump and Senate Republican leaders force a shutdown because they will not accept a bipartisan plan to save DREAM Act, they will be annihilated by the high court of public opinion in our democratic nation.

The huge majority of voters who support the DREAM Act know that the president made despicable and sickening comments last week that were widely viewed as racist during a meeting to discuss this urgently needed bipartisan compromise to save the DREAM Act. They will hold Republicans accountable for the shutdown that will happen if the president's contempt appears to be Republican policy on the issue a huge majority of Americans support.

The issue does not divide red states and blue states with support for the Dreamers so powerful, huge and dramatic that many Republican voters join independent and Democratic voters in support of the Dreamers.

Related Topic(s): Democratic Legislation; Democrats; Dreamer Shutdown Showdown; Republican; Trump Ego, Add Tags
Add to My Group(s)
Go To Commenting
The views expressed herein are the sole responsibility of the author and do not necessarily reflect those of this website or its editors.