The California senator suspends her presidential campaign, as Bloomberg buys his way in. 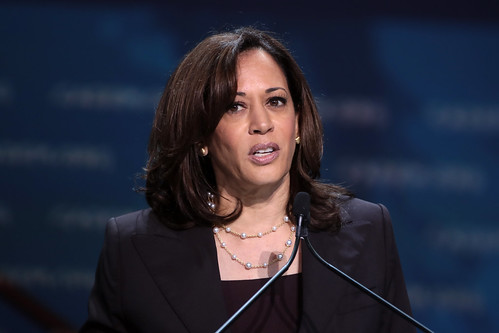 Christine Pelosi, who knows a thing or two about politics, had a sound take on Kamala Harris's decision to suspend her bid for the 2020 Democratic presidential nomination.

"We can't tell the story about Kamala Harris 2020 without speaking of sexism, misogynoir, and big money in politics," tweeted Pelosi, a longtime Democratic National Committee member, former executive director of the California Democratic Party, and member of a family that has been active at the top tier of Democratic politics since FDR's day. "Kamala has the integrity to see that she could overcome one or two but not all three. Whichever candidate you choose as Democrat for president, fight to dismantle all three."

In her announcement Tuesday, Harris emphasized the "big money" issue:

"My campaign for president simply doesn't have the financial resources we need to continue.

"I'm not a billionaire. I can't fund my own campaign. And as the campaign has gone on, it's become harder and harder to raise the money we need to compete.

"In good faith, I can't tell you, my supporters and volunteers, that I have a path forward if I don't believe I do.

"So, to you my supporters, it is with deep regret -- but also with deep gratitude -- that I am suspending my campaign today."

Harris also pointed out that "our campaign uniquely spoke to the experiences of Black women and people of color -- and their importance to the success and future of this party. Our campaign demanded no one should be taken for granted by any political party."

Democrats would do well to pause and reflect on that message and her conclusion that: "We will keep up that fight because no one should be made to fight alone." The party now faces the prospect that its next debate could feature only white contenders; so far just Joe Biden, Elizabeth Warren, Tom Steyer, Bernie Sanders, Amy Klobuchar, and Pete Buttigieg have qualified. New Jersey Senator Cory Booker, a candidate who has yet to qualify for the debate, says, "We're spiraling towards a debate stage that could have six people with no diversity whatsoever."

Related Topic(s): Democratic; Issues; Kamala Harris; Politics; Suspended, Add Tags
Add to My Group(s)
Go To Commenting
The views expressed herein are the sole responsibility of the author and do not necessarily reflect those of this website or its editors.