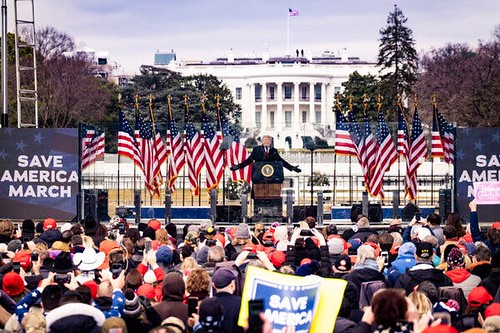 "Relman agrees that in the absence of conclusive evidence, the message on origins should be 'We don't know.'"

- from "Did the coronavirus leak from a lab? These scientists say we shouldn't rule it out." MIT Technology Review. March 18, 2021

In early 1969 when Abbie Hoffman and 6 (7) others went on trial for inciting the riots that erupted during the Chicago Democratic National Convention (DNC), and led to widespread property damage and personal injuries, he declared to the world: "We are on trial for our thoughts." The Chicago 7 were the first to be charged under the new Rap Brown law, which states that it is "a felony to 'travel in interstate commerce...with the intent to incite, promote, encourage, participate in and carry on a riot.'" It was widely criticized for "equating political protests with violent activity."

The trial centered on the so-called conspirators's "intentions" leading up to their trip to Chicago to lead the protests against the Viet Nam war and the political travesty at the DNC. (LBJ had dropped out of the presidential race, RFK got murdered, and the DNC pushed Hubert Humphrey, who got nominated without any critical appraisal or negotiated platform, meaning university-aged citizens outside could still be drafted to fight in Nam but could not vote). The conspirators weren't all Yippies, as is sometimes supposed, but also members of the Black Panthers, SDS, and MOBE. An interesting fact, often left out of MSM reporting about the 1968 Chicago events, is that 8 Chicago police officers were also charged with beating up protesters, and a later internal government investigation determined that the cops had started the rioting.

During the trial, it was revealed that undercover cops had infiltrated the group of "conspirators' and were put on the stand to help establish the mindset (i.e., intentions) of the defendants. Eventually, after much drama, and not a little hijinks from Hoffman and Jerry Rubin at the trial, the Chicago 7's "thoughts" were acquitted.

Flash forward to January 6, 2021. There are some interesting parallels. President Donald J. Trump in a fiery oratory called on MAGA dog(matist)s to march with him to the Capitol to stop the legal, political process underway -- to wit, the affirming of the states's electoral college votes certifying Biden's victory in the recent presidential election. Unlike Abbie and his fellow "conspirators," who could not be nailed for specifically calling for violence in Chicago (the undercover cop testimony amounted to subjective interpretation). But that's not so with Trump. During the oratory alluded to above, Trump is clearly massaging (though not directing) his followers with his speech. WaPo, aka, The Democracy Dies Darkly Daily, does a good job underlining the president's dog whistle calls for violence. At one point he tells them, "This is not just a matter of domestic politics; this is a matter of national security." National Security? Can you believe it? Check it out.

There are other things that DC 2021 has in common with Chicago 68. The march was planned way ahead of time; the list of leading participants largely known; the "insurrection" featured clowns and circus freaks (yes, there were sword swallowers in Chicago). But the main similarity is that in both cases the cops started the rioting. In Chicago, the cops started unleashing violence against the protesters and passersby, even beating the snot out of some journalists. In DC, the cops started the riot BY DOING NEXT TO NOTHING to stop the crowd from entering the Capitol, despite the fact that an important political process was underway, and having had plenty of warning about the ill intentions of the MAGA crowd, including, no doubt, willy whistling back to the FBI by one its key informants, Enrique Terrio, head of the Proud Boys.

Most people you might ask would agree that had Blacks come towards the Capitol the MAGA way to protest their continuous voter disenfranchisement, there would have been blood, and more than Nancy's podium would have gone missing -- some seriously awesome smart TVs would have gone missing, too, and, being wireless, probably would have been showing the theft of themselves live. Pass the bong. For the few who think this is empty blatherscheissen, Michael E. Tigar, over at Black Agenda Report, lays out how the Rap Brown law was used in Chicago 68 and Seattle 69 and anticipates how it would play out with Antifa groups in 2020.

Without elaboration, in a New Yorker interview with Noam Chomsky, the ancient linguist tells writer Isaac Chotiner that Trump is "the worst criminal in human history," and James Risen, over at The Intercept, referred to Trump as a murderer after his reckless sushi cruise missile took out Iranian general Qasem Soleimani. Trump could plausibly be tried for manslaughter. He, with the help of his father, drove his brother X to a Gatsby-esque suicide by drink, mocking him all the time for settling for a "losers" job as airline pilot, when he should have been helping the family clear inventory in the piggy trough. Marie Brenner, in a Vanity Fair piece, quotes Trump as asking his brother, "What is the difference between what you do and driving a bus? Why aren't you in the family real-estate business?"

Trump can't be arrested for helping to kill his brother, but if The Hague were operating on all cylinders, or if the UN had, er, gumption, Trump could be taken for virtually declaring war on Iran by murdering its top soldier -- without provocation or reason. Read Pulitzer Prize-winning writer James Risen's piece, link above, for the argument.

Covid-19. Trump could be charged with crimes against humanity.

He reversed Obama's 2014 order to defund gain-of-function research because his administration knew that such research could generate a strain of virus that accidentally could (it had during Ebola research) leak from a research lab and be unstoppable.