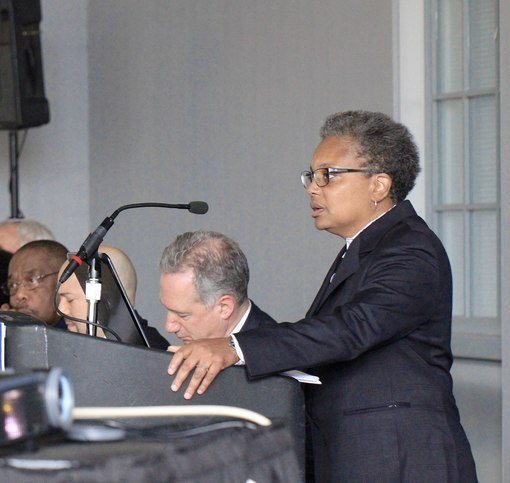 Beyond the identity-politicized excitement of Chicago electing its first Black female chief executive and becoming the largest U.S. city to have a Black female mayor (and to have a gay mayor), there wasn't all that much for a leftist to choose from between victor Lori Lightfoot and her opponent Toni Preckwinkle. Mayor-Elect Lightfoot is a longtime corporate lawyer, a partner in the venerable multinational Mayer-Brown firm, and a former federal prosecutor. She covered for the legendarily racist Chicago police (currently operating under a federal civil rights consent decree) in her role as the head of outgoing Mayor Rahm Emanuel's Police Accountability Task Force. She did the same on the Chicago Police Board under Mayor Richard M. Daley.

None of this stopped Lightfoot from branding herself as an outsider "progressive" seeking to clean up the city's corrupt practices and deliver its forgotten people and neighborhoods from oppression and neglect.

"It's hard," Chicago native Matt Reichel wrote me, "not to be skeptical of a former federal prosecutor who spent most of her career siding with the cops in police misconduct cases until she recently decided to opportunistically re-brand herself a 'reformer.'"

There's a reason that white police officers voted for Lightfoot. "If someone had told me in the era of Richard J. Daley (when I moved to Chicago) that cop neighborhoods such as Mount Greenwood would vote overwhelmingly for an African American woman," longtime Chicago activist Kingsley Clark writes, "I would have said: 'What are you smoking, man!' The word 'progressive' lost meaning with the Clintons and was buried deep in this mayoral election. Those Chicagoans who cling to that illusory concept are going to be mightily disappointed."

Like with the silver-tongued neoliberal "from Chicago" (really from Honolulu and Harvard Law) Barack Obama? Obama must have used the word "progressive" at least a thousand times to describe himself on his path to the presidency between 2004 and 2009. We saw how that worked out.

The 44th president called to congratulate Lightfoot, one rich fake-progressive identity-cloaked corporatist talking to another.

Lightfoot's victory is arguably another in a long line of nails in the coffin of the old Chicago machine. Preckwinkle is a longstanding machine politician, the president of the Cook County Board and the head of the Cook County Democratic Party. She has been caught up in the campaign finance shenanigans of the legendarily corrupt 14th Ward alderman Ed Burke. The Black female Preckwinkle was bidding to become the first politician to hold both the Chicago mayoralty and the top Cook County Democratic position since the original Chicago Mayor Daley the last big city patronage boss Richard J. Daley (whose reign ran from 1955 through 1976).

But the old machine, based on the trade of city jobs for votes, died long ago. The new machine under Mayors Richard M. Daley (1989-2011) and Rahm "Mayor 1%" Emanuel (2011-2019) has been based on neoliberal "pinstripe patronage" the trading of city contracts, corporate privatization deals, tax-breaks, and taxpayer-funded development deals greased by regressive Tax Increment Financing (TIF) arrangements (rampant throughout the city). The "business community" got behind Lightfoot in the reasonable expectation that she will keep urban neoliberalism machine set on profit.

According to veteran Chicago left activist and author Joe Allen, "The fact that the leader of the Democratic Party and such an entrenched politician as Preckwinkle went down to historic defeat shows once again that the political establishment is under siege in Chicago and across the United States...But when it comes to all the key issues around police reform, gentrification, the schools," Allen ads, Lightfoot "is our class enemy."

What's Officially "Historic" and What's Not

Paul Street (www.paulstreet.org and paulstreet99@yahoo.com) is the author of Empire and Inequality: America and the World Since 9/11 (2004), Racial Oppression in the Global Metropolis (2007), Barack Obama and the Future of American Politics (more...)
Related Topic(s): Chicago Americas Murder And Racist Killing Capitol; Chicago Mayoral Race; Chicago Police; Emmanuel; Female; Identity Politics; Mayor; Police; Racism; Reporters, Add Tags
Add to My Group(s)
Go To Commenting
The views expressed herein are the sole responsibility of the author and do not necessarily reflect those of this website or its editors.