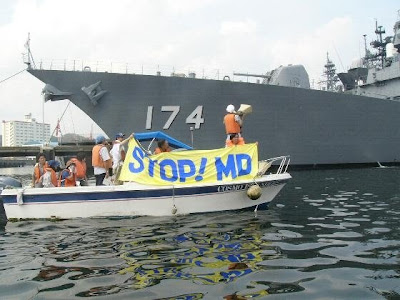 The Global Network Against Weapons & Nuclear Power in Space will hold its 17th annual space organizing conference in Seoul, South Korea on April 16-18, 2009. The group is made up of 150 peace groups around the world who are working to oppose the introduction of weapons and nuclear power into space. The theme for the annual conference will be Asian-Pacific Missile Defense and an End to the Arms Race in the region.

Ten Korean peace organizations, led by the Peace Network and the People’s Solidarity for Participatory Democracy, will host the 2009 Global Network space conference. Activists will come to South Korea from as far away as India, Australia, England, Italy, Philippines, Sweden, and Japan. The U.S. delegation will consist of activists from Maine, New York, Colorado, Hawaii, Nebraska, and Florida. Of particular interest this year will be discussions about U.S. military expansion in the Asian-Pacific region including its controversial “missile defense” deployments in Japan, South Korea, and Australia.

According to Korea Peace Network activist Wooksik Cheong, "Tension has been recently increasing in the Korean peninsula and in Northeast Asia around the issue of North Korea’s planned rocket launch and of the U.S. and Japan’s mobilizations for the possible interception of it, using the missile defense system. It illustrates why the Korean peninsula is the core area regarding the issue of the space weapons including the missile defense system in the world. The conference in Seoul happens in the right place and time to make missile defense and arms race issue one of the focal points of the peace movements in the world.”

Global Network Coordinator Bruce Gagnon stated, “U.S. deployments of ‘missile defense’ systems in the Asian-Pacific, in addition to its massive military build-up in the region, is now driving an arms race there. Since 2000 the U.S. Navy has virtually doubled its presence in the Asian-Pacific, largely used to surround China. This destabilization of the region only benefits the military industrial complex that makes massive profits from a dangerous new arms race. Japan, a historic imperial power, is joining the U.S. in this deadly escalation of militarism which severely complicates the dynamics in the region.”

The Global Network contends that the Obama administration must immediately begin dismantling U.S. nuclear weapons and closing down the more than 800 military bases in the American military empire. In addition the U.S. must join Russia and China’s call to negotiate a global ban on weapons in space before a full-blown arms race in the heavens begins. Today the U.S. spends more on its military than all other countries in the world combined.