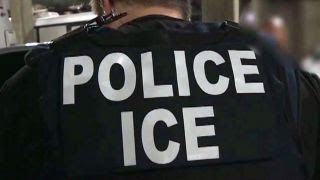 ICE has strayed so far from its mission. It's supposed to be here to keep Americans safe, but what it's turned into is, frankly, a terrorist organization of its own, that is terrorizing people who are coming to this country.

ICE (US Immigration and Customs Enforcement) is the largest police agency (some 20,000 employees, offices in 50 states and 48 foreign countries) in the Department of Homeland Security. Created with little serious thought in the post-9/11 government panic, ICE was supposed to be a bulwark against the inflated threat of international terrorism.

Over the past 15 years, lacking enough serious criminals to justify its $6 billion budget, ICE has reduced itself (with poisonous political pandering in support) to the horrifying monster we're finally seeing more clearly, littering the American landscape with caged parents and children, broken families (by choice, not by law), incarcerated innocents, harmless working taxpayers, and disrupted American businesses -- a full range of social mayhem chosen by the past several presidents in preference to any humane, decent policy rooted in justice.

In 2002, Congress voted to make ICE a national police force with Gestapo-like powers. Corrupt law and corrupt politics have produced corrupt results. What a surprise.

How best to respond to this paramilitary police state operation that mostly produces human carnage (including widespread sexual abuse of detainees since 2010)? How best to end the chronic violation of human rights law by this brutal regime that denies asylum to the persecuted and sends them back to suffer or die?

The current movement to abolish ICE began last winter with a piece in The Nation magazine, in which Sean McElwee concluded: "It's time to rein in the greatest threat we face: an unaccountable strike force executing a campaign of ethnic cleansing." Abolishing ICE is no panacea, but it is a necessary first step to creating immigration policy based on law, compassion, and our own better history.

The political will to reinvent American idealism may or may not emerge in the face of vicious, bipartisan opposition. On June 21, Cynthia Nixon apparently became the first high-profile politician to call ICE by its rightful terrorist name and to call for its abolition. She's running for Governor of New York against Democratic establishment hope-crusher Andrew Cuomo, who supports ICE. But two days before Nixon spoke out, Cuomo announced his plan for New York to file a multi-agency lawsuit against the Trump administration for "violating the Constitutional rights of thousands of immigrant children and their parents who have been separated at the border." The treatment of families at the border is only one part of ICE's assault on human rights, as Cuomo surely knows, as indicated in his apparently ironic comment: "I think ICE should be a bonafide law enforcement organization that prudently and diligently enforces the law." [emphasis added]

Nixon first spoke out against ICE at the St. Paul and St. Andrew United Methodist Church in New York City. The church has given sanctuary to a 32-year-old Guatemalan mother, Debora Berenice Vasquez, and her two children (both US citizens), after ICE threatened them with deportation. How do these facts square with ICE's promise: "We vow to continue our mission to protect the United States by promoting homeland security and public safety through the criminal and civil enforcement of federal laws..."? What "homeland security" or "public" is served by taking 13 years to bring a case that robs a mother of her job and freedom while traumatizing her two American children? At the church's press conference announcing the sanctuary, Nixon said:

"Thank you, from the bottom of our hearts, for offering sanctuary to Debora and her children. And thank you for giving us all a place to gather today to stand up with one voice as New Yorkers and say, 'No,' and say, 'No, not in our name. Not in our name.'"

This event didn't happen in a vacuum. On June 26, New Yorkers voted in their Democratic primary and in one race rejected a member of the House leadership, who carefully supports ICE (he voted to create it) and who doesn't live in his district -- in favor of a 28-year-old Latina whose campaign targeted ICE and the party's aging, out-of-touch leadership. Alexandria Ocasio-Cortez grew up in the district that covers much of the Bronx and Queens. She graduated from Boston University and came home and organized. She was the first to challenge the incumbent in more than a decade. She said of her campaign:

"It's time we acknowledge that not all democrats are the same. That a Democrat who takes corporate money, profits off of foreclosure, doesn't live here, doesn't send his kids to our schools, doesn't drink our water or breathe our air cannot possibly represent us."

She was describing the media-cliche' "powerful Democrat," 10-term congressman Joseph Crowley, crony to Nancy Pelosi and Steny Hoyer and presumed easy winner of the seat to which he was surely entitled, along with his predicted rise to Speaker of the House. The race got little attention until the media and professional politicians woke up "surprised" to find that a former organizer for Bernie Sanders had won the nomination with more than 57% of the vote. Trump and the rest of the right-wing dishonest noise machine are already lying about what Ocasio-Cortez and other Democrats stand for, as Trump called Democrats "now officially the party of impeachment, open borders, abolishing ICE, banning the 2nd Amendment and unbridled socialism." What Ocasio-Cortez actually said about ICE has had nothing to do with open borders:

"Abolishing ICE doesn't mean get rid of our immigration policy, but what it does mean is to get rid of the draconian enforcement that has happened since 2003 that routinely violates our civil rights, because, frankly, it was designed with that structure in mind."

The day before the primary, June 25, a Democratic candidate for New York Attorney General published an editorial in the Guardian titled: "ICE is a tool of illegality. It must be abolished." Fordham law professor Zephyr Teachout is challenging at least three other candidates in the September 13 primary for the open office, but the filing deadline doesn't close the race till July 12. The temporary attorney general, Barbara Underwood, is not running. She replaced AG Eric Schneiderman (also a Democrat) who resigned in May amidst sexual misconduct allegations. Teachout appears to be the only candidate calling for the abolition of ICE, writing in The Guardian:

"Let's be clear: Ice is a fairly recent development. When the George W Bush administration successfully pushed to place immigration enforcement within the Department of Homeland Security (DHS), it transformed decades of past practice where internal immigration policy was conducted by the justice department. The new policy sent a clear and chilling signal: immigrants should be treated as criminals and a national security threat."

The same day as Teachout's editorial, four current Congress members -- Mark Pocan (D-Wis.), Earl Blumenauer (D-Ore.), Jim McGovern (D-Mass.) and Pramila Jayapal (D-Wash.) -- said they would support legislation to abolish ICE. Representative Pocan said he would introduce a bill this week (it was not available as of June 28). Pocan explained his motivation in a press release:

"During my trip to the southern border, it was clear that ICE, and its actions of hunting down and tearing apart families, has wreaked havoc on far too many people. From conducting raids at garden centers and meatpacking plants, to breaking up families at churches and schools, ICE is tearing apart families and ripping at the moral fabric of our nation. Unfortunately, President Trump and his team of white nationalists, including Stephen Miller, have so misused ICE that the agency can no longer accomplish its goals effectively.

"I'm introducing legislation that would abolish ICE and crack down on the agency's blanket directive to target and round up individuals and families. The heartless actions of this abused agency do not represent the values of our nation and the U.S. must develop a more humane immigration system, one that treats every person with dignity and respect."

A weeklong barricade of ICE offices in Southwest Portland, Oregon, has been broken up by police. Representative Blumenauer spoke in favor of the protestors at a rally at City Hall. He voted against the creation of ICE in 2002. In support of Pocan's legislation, Blumenauer wrote:

"We should abolish ICE and start over, focusing on our priorities to protect our families and our borders in a humane and thoughtful fashion. Now is the time for immigration reform that ensures people are treated with compassion and respect. Not only because it is the moral thing to do, but it's better policy and will cost less."

Rational, moral, and humane as these voices are, they still represent only a small minority of Democrats, most of whom have run for cover on the issue. Media coverage tends to treat "abolish ICE" as a trivial issue or at Fox, an offense against the state. Democrats of note appear intimidated by the issue. Bernie Sanders voted against ICE, now doesn't want to abolish it. Nancy Pelosi voted against ICE, now supports it. In all, 120 Democrats in Congress opposed ICE in 2002, but today only four are on record to abolish it. In 2002, Democratic senators overwhelmingly supported creating ICE in a 90-9 Senate vote. None of the 9 Democrats opposing ICE in 2002 remain in office.

Vermonter living in Woodstock: elected to five terms (served 20 years) as side judge (sitting in Superior, Family, and Small Claims Courts); public radio producer, "The Panther Program" -- nationally distributed, three albums (at CD Baby), some (more...)
Related Topic(s): Atrocities; Ice Agency; Immigration; Police; Terrorists-Terrorism, Add Tags
Add to My Group(s)
Go To Commenting
The views expressed herein are the sole responsibility of the author and do not necessarily reflect those of this website or its editors.