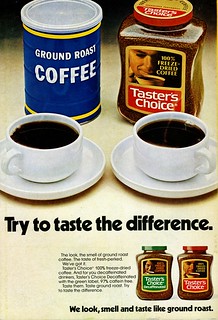 In my life there have been many occasions when I have said to myself that "I would never do that" and really felt that I meant it. One situation I can speak of that was especially true; that is, when it came to repeating the parenting styles of friends and relatives. I would "never" do this; or, "never" do that. But then you turn around and find yourself doing exactly what you said you would "never" do!

So, this mindset of never say "never" was also true when I began to make my plans to join the Peace Corps here in Georgia. As I read about the country and the culture/customs I said to myself "Ok, I will never do that, and as I read further and more in detail about the country I said to myself "I would never do that" only to find out how wrong I was. So let me give you some examples of never say "never" situations that I was so wrong about here in Peace Corps Georgia.

I would like to begin with Instant Coffee. Most Georgians drink instant coffee. I don't like instant coffee and thought that I would "never" drink it here in Georgia. I am a "Dunkin Donuts" junkie and sometimes "Starbucks"; but my coffee is always brewed (with or without a filter -- depending on the machine).You could say that I am a coffee snob. I don't drink a lot of coffee (maybe two cups a day); but, dear reader, I have not drank instant coffee for many, many decades. If real coffee was not available I would drink tea or maybe just water; and that is what I thought I would drink during my service here in Georgia.

So, true to my mindset; I began drinking tea here in Georgia. I cannot tell you how disappointing it was not to have coffee. Although there are some places now, here in Georgia, that offer brewed coffee; initially, these locations were just not available to me. I was just so unhappy with tea that I decided that I would give instant coffee a try. I thought that maybe it is not as bad as I thought. So, I began my instant coffee exploration. I tried all different kinds and the more I tried different kinds (I even started to mix different brand together) I began to see that it was not that bad. It took six months to finally realize that my never say "never" mindset with coffee had just flown out the window. I am not in love with instant coffee (I am still a brewed coffee gal); but, most days I run up my mountain after the school day thinking about my reward of having a cup of instant coffee. I sit on the porch and cherish my moments with my cup of "Joe." Whether it is hot or cold outside; nothing interferes with my reward cup of instant coffee. I smile when I think about the time I wasted with tea all because of my wrongly held views on instant coffee.

Another example of never say "never" was my belief that I would never have long hair in Georgia. As I prepared for departure and was searching web sites about Georgia I noticed that so many of the women, young and old, had long hair. Now, when I say long I mean long hair. Some women had hair below their waist line. All I could think about was how they could possible take care of so much hair when often time water is not available. Just having all that hair in and around face and neck was something that made me feel overwhelmed.

I have come to understand that women and girls having long hair is a country wide custom here in Georgia and once again I said "I would never have long hair." My hair has always been short. I have not had long hair since I was ten years old (many decades); so, I felt pretty confident that my mindset of "never" would hold. What I didn't know was that the beauty salons that I was able to access in my town just didn't really know what to do with cutting short hair. Initially after the hair cut my hair looked OK; however, as it started to grow my hair was not looking so good. I had hair growing every which way. At times I looked like Alfalfa (remember him from The Little Rascals). J

So, never say "never" again went out the window and I decided to let my hair grow. This was a monumental decision on my part as I really didn't have any idea what having hair (lots of hair) on my head would feel like. I started this endeavor in January and it was great as the hair kept my head warm (this was entirely new to me). Everyone noticed and complimented me on my new look. I even started to like it. I had enough hair after a couple of months to even make a little pony tail at the base of my neck. This was a new world for me. I bought hair ribbons and hair clips thing-ees that I could never remember buying before. All I wanted to do was run my fingers through my hair as it was a totally foreign experience for me. Alas, it was all good and I was really getting into the "girly" hair thing and then summer came. I tried, dear reader, I really tried but all that hair on my head and neck was just not working for me. I felt like I was washing a rug that just happened to be attached to my head. It was time for a change. I started searching for someone to cut my hair and finally found a man (up to that point I had only had my hair cut by women) who would cut my hair short. He did a terrific job and hair that was cut looked better on the floor than it did on my head.

The one final never say "never" experience I want to share is what I think of as hoarding or just not throwing stuff away. I would watch as every time a coffee jar was emptied or a bottle of soda was finished (among other items) instead of it being tossed in the recycling bin or just discarded; the item ended up in the room that the families use for storage. I noticed at one time there were dozens of jars and bottles just standing around gathering dust. Ok, so once again I just didn't understand that so many of these containers would be used for preserving foods that would be used during the winter. Initially I thought, I could never just keep stuff around that maybe at some point I might use. I am an American and we just throw stuff away.

In any event, as time went on I realized that I was not throwing jars, bottles, medicine bottles, paper, boxes, plastic, etc., etc., out with the trash. My mindset had changed and I thought I should keep whatever I was throwing out as I might need it or the family might need it. It was a radical shift in my thinking. I now have many items in my room that would have been thrown away the first couple of months I was in Georgia. I now realize that usually resources are not abundant and it is important to have items around to use if needed.

So, all this boils down to my knowing that whenever I think that I will "never" do something here in Georgia, I stop and give myself pause to remember all of the misnomers I've discovered so far. I am sure there will be more; but, I realize that when I have the "never" thought I know that it will be short lived.

I am a Peace Corps Volunteer living in the Republic of Georgia. I am 64 years old, retired from my position in the US and forging a new life here. I am here in Sagarejo, Georgia as a teacher with the Peace Corps. Although I am a Reading (more...)

Related Topic(s): Living; Thinking, Add Tags
Add to My Group(s)
Go To Commenting
The views expressed herein are the sole responsibility of the author and do not necessarily reflect those of this website or its editors.

A Change of Plan

Marshrutka: Getting Around in Georgia! Peace Corps Volunteer/Georgia

"Time" in the Peace Corps