I was judged a child prodigy.

School teachers and headmaster saw great potential in me.

They started to invest their time and effort in training me for public speaking and I was called upon to speak whenever a Governor or Minister showed up.

Now this is sometime in 1975 or 76. I was 10 years old. And I am called to speak at an event about the imminent " extinction" due to population explosion. Prime Minister Indira Gandhi and her son Sanjay had issued a radical 20-point program to change India and stop population growth.

A speech is written and I am asked to practice and deliver it. 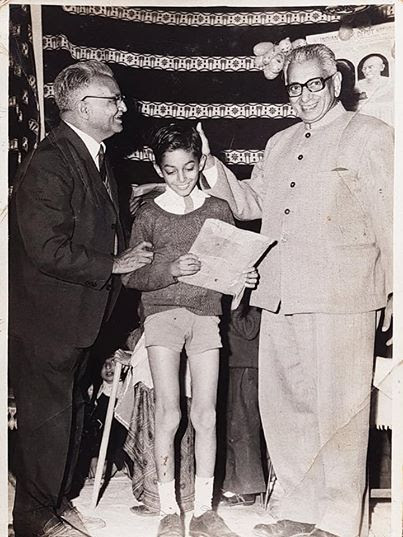 I was good. The speech was good. I believed every word of it. The audience is in tears. I really make everyone believe that the population bomb was going to go off and we would be killing each other for specks of food and drops of water. That our only hope was radical action the action plan of Indira Gandhi. The Governor asks about my family and I am promised a scholarship.

I would be invited to speak at the parliament in New Delhi.

A few days later, my father, a professor, asks me for some help. We kids, and Mom, carve and cut cavities in books and Dad places some letters inside. Then he and I go by bike to a part of city I have never been to. It's the city prison. We enter the prison together and then while I sit outside and talk to guards, "Professor Goyal" meets some prisoners and hands them the books. He was smuggling letters to political prisoners.

I am only ten but hardly a fool. I ask him what are we doing. He tells me that dozens of his friends are arrested by Indira Gandhi because she wants to force medical operations on people, and do whatever she wants to do, without anyone questioning her. The people inside question her.

This totally messes with my head.

How can the great Indira Gandhi, a person all my teachers and headmaster worship, be doing something bad! How could anything be wrong with a 20-point program to stop extinction and end poverty all in one go!

But I also had unshakeable faith in my father. And now I was part of a conspiracy.

It took some years of growing up and finding out what Indira and her son Sanjay Gandhi had been up to. There were forced vasectomies on tens of thousands of people. Also paying money for vasectomies, to stop people from having kids. They had made poverty, illiteracy, and all things bad against the law. But in reality, they were a corrupt regime. They had the best of intentions, maybe. But that just made it a road to hell. And I was a child warrior fighting for them.

As I see Greta Thunberg, I can't help thinking that this child is being used and abused. She is a child soldier in an adults' war. She is being egged on into a situation where she will be manipulated and great harm will come to her.

Ajay Goyal (born 12 July 1965) is the founder, owner, and president of Zening Resorts Ltd.[1] Goyal was Publisher and Editor in Chief of The Russia Journal newspaper group from 1998 until 2005. (more...)
Related Topic(s): Greta Thunberg Teenage Swedish Environmental Leade, Add Tags
Add to My Group(s)
Go To Commenting
The views expressed herein are the sole responsibility of the author and do not necessarily reflect those of this website or its editors.