"I'll hunt in the mountains of Zomba-ma-Tant
With helpers who all wear their eyes at a slant."
- Dr. Seuss, If I Ran The Zoo

In a society that is evolving, looking back is sometimes going to be uncomfortable. Images and prose that were once considered acceptable or even commonplace in the times that they were created can be seen as hateful and propagating bigotry in a modern context now that the sins of the past are recognized.

While Theodor Geisel, better known to the world as Dr. Seuss, tackles themes that are embraced by liberals in books like The Lorax, The Sneetches, and Green Eggs and Ham, he was not immune from the effects of the culture that existed around him. In several of his books, he included imagery and words that are clearly bigoted using today's standards. This includes illustrations that overemphasize the racial features of characters and depicted stereotyped caricatures of foreign cultures.

If Geisel was still alive, he would have the ability to change his work and to erase the offending sections. With this option unavailable, the foundation that controls the rights to his catalog has decided to stop publishing six of his books because they "portray people in ways that are hurtful and wrong." Dr. Seuss Enterprises says that this decision is part of its commitment "to ensure [that the] catalog represents and supports all communities and families."

Faced with a similar dilemma, the Walt Disney Company used a different strategy. Popular films like Peter Pan and Dumbo are masterpieces that contain imagery of native Americans and black people that are also not acceptable. Instead of pulling the movies from distribution or removing the scenes, the company added the following content warning to the beginning of the movies on Disney+:

"This program includes negative depictions and/or mistreatment of people or cultures. These stereotypes were wrong then and are wrong now. Rather than remove this content, we want to acknowledge its harmful impact, learn from it, and spark conversation to create a more inclusive future together. Disney is committed to creating stories with inspirational and aspirational themes that reflect the rich diversity of the human experience around the globe."

A similar warning appears before certain episodes of the Muppet Show, including one where Johnny Cash sings in front of the Confederate Battle Flag.

Warner Brothers faced a similar problem with Pepe Le Pew, the cartoon skunk who relentlessly pursues the object of his affection even after she has made it clear that she is not interested. Having a character whose entire schtick is based on the fact he does not seem to understand that "no means no" is bad enough when dealing with material that was created before societal enlightenment. Continuing his legacy by including the skunk in a new movie was a bridge too far and Le Pew was removed from Space Jam 2.

Despite the fact that Dr. Seuss, the Muppets, and Pepe Le Pew will continue to exist after the actions of the corporations that own their copyrights, Fox "News" has used them as examples of "cancel culture." Feeding off their viewers' nostalgia for the Good Ol' Days when racism and bigotry could be openly expressed without consequences, the network has used these stories to feed its outrage machine and promote the latest battle in the ongoing culture war that they rely on for ratings. One recent guest declared that "when we start down the road of policing speech that we don't like, we're going down a very dark road." If we don't stop these "millennial Maoists [that are] terrorizing the culture via social media" we may get to the point where "we may not recognize the country that we grew up in." He then argued that Gen X should be "leading the charge" towards fighting back.

In addition to the fact that just two months ago Republicans attempted to cancel the results of an election that they did not like, the fact that the conservative propaganda channel would call on Gen X to fight this battle is extremely ironic. As a member of this generation, I have watched conservatives try to ban speech that they did not like long before "political correctness" became a rallying cry. When the Piss Christ photograph offended their religious sensibilities, they tried to defund the National Endowment of the Arts. Their misunderstanding of "The Last Temptation Of Christ" caused them to protest movie theaters that dared to show the movie. Ice-T and his heavy-metal band, Body Count, attracted even stronger actions.

In 1992, Body Count released a song called "Cop Killer," which was a protest against police brutality. To clarify the target of his message Ice-T even dedicates the song to "every cop that has ever taken advantage of somebody, beat 'em down or hurt 'em, because they have long hair, listen to the wrong kind of music, wrong color, whatever they thought was the reason to do it."

Given the violent imagery of revenge contained in the song, it is not surprising that this song was not well received by mainstream America. The former President of the National Association of Chiefs of Police described the song as a "misuse of the First Amendment." Both President Bush and Vice-President Quayle publicly denounced the record. In an effort to stop further distribution, Charlton Heston addressed the shareholders of Time-Warner, the parent company of Body Count's record label.

Like the lyrics of the song itself, all of the above forms of speech are protected by the First Amendment. Unfortunately, the opponents of this record went further. Their actions included anonymous death threats. Police in Greensboro, North Carolina, told the owner of a local record store that "they would no longer respond to any emergency calls at the store if they continued to sell the album." Local municipalities also tried to put pressure on the band as they toured to support the album.

In Los Angeles, Body Count was unable to play the venues that metal bands would usually perform. The grapevine was filled with stories that these clubs were warned that future license renewals would be in jeopardy if they booked the band. Therefore, the show was held in an old theatre that would soon be closed. My pregnant ex-wife and I were in attendance making this my oldest daughter's first concert. 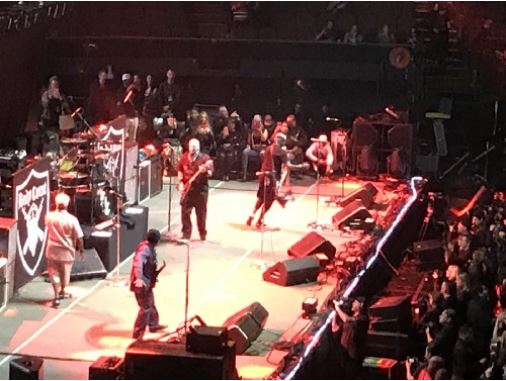 Body Count in 2018 at Ozzfest
(Image by Carl J. Petersen)   Details   DMCA
On the night of the show, the harassment was transferred to the audience. Despite the fact that a good portion of those in attendance were yuppies who were there for the "event" aspect of the evening and did not even realize that Body Count differed from Ice-T's rap act, the police presence was indicative of a Hell's Angel's convention. Fire marshalls actually lined the stage and after the second song, they forced the venue to keep the house lights on for the duration of the performance. Stage diving was banned not by the venue but by the fire marshall who promised to stop the show if it occurred even once.

Related Topic(s): Cancel Culture, Add Tags
Add to My Group(s)
Go To Commenting
The views expressed herein are the sole responsibility of the author and do not necessarily reflect those of this website or its editors.